Burton Plans Entertainment Hub at Its Burlington Campus | Off Message Burton Snowboards wants to repurpose warehouse space at its global headquarters in Burlington for an entertainment hub anchored by an 8,000-square-foot concert venue.

Justin Worthley, the company’s senior vice president of human resources, envisions food and beer options that would complement the band space and turn the South End campus into a destination for visitors.

The project is contingent on the Burlington Planning Commission altering a zoning rule that limits performing arts venues in the area to 5,000 square feet and requires they be on Pine Street. The commission will discuss the change Wednesday. If it gives the green light, the proposed change will move on to the council for approval.

“We’re really invested in making this work, and we think it will,” said Worthley, who also serves as the company’s de facto community relations rep. “We think it’s an amazing thing that people in Burlington are gonna think is awesome. Everybody we’ve talked to about it has been very positive.”

Burton owns about 155,000 square feet of space in two buildings on Industrial Parkway. During a campus tour Monday, Worthley showed a reporter a largely unused section of warehouse — 60 feet wide and 150 feet long, with 40-foot ceilings — that, until 2014, was occupied by General Dynamics. That company used the room to manufacture radar turrets for Navy destroyers, according to Worthley. He imagines the room filled with people rocking out to a band. The space lends itself to such a venue, Worthley said. 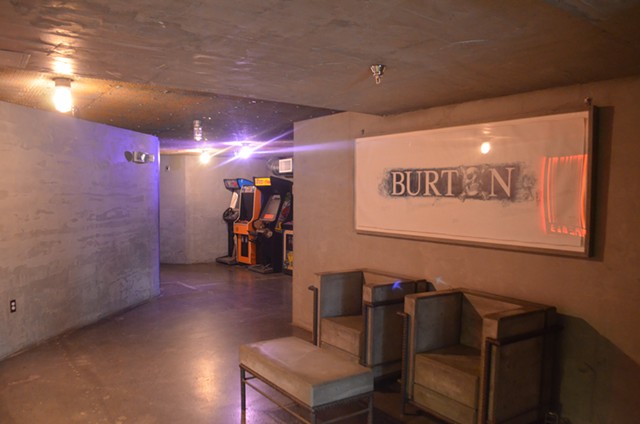 First things first: Burton needs a zoning change. Then, according to Worthley, the company would need to invest about $1 million in infrastructure, which would include upgrading the building’s stormwater collection system, replacing the fire alarm control panel and undertaking utility work.

Worthley further said he’s been in touch with Talent Skatepark about occupying a 10,000-square-foot space that Burton uses for storage. Talent closed its indoor South Burlington facility in August, and owner Hannah Deene Wood said the space “would be a perfect fit for what my goals are for the rebirth of Talent." Deene Wood is raising funds to open a new location.

“I would be very happy there,” said Deene Wood, who has previously collaborated with Burton’s Chill Foundation on programs for underserved youth.

Burton would likely move its retail store from 80 Industrial Parkway next door to the upgraded space at 152 Industrial, where the company maintains a snowboard museum, a company archive and Craig's Prototype Facility, its research and development lab. Burton offers guided tours, which, according to Worthley, have not taken off in the way that they have for businesses such as Lake Champlain Chocolates and Ben & Jerry's. Those Vermont companies welcome tens of thousands of tour-takers each year.

Worthley was less forthcoming about potential food and drink vendors at the facility, but said he’s heard from plenty of interested businesses.

“For all of the partners, and for us too, the project is really attractive because it’s just unique,” he said. “It’s sort of this mashup hub of cool Vermont brands … in an old industrial building that’s not your typical retail space. So it hasn’t been hard to convince anyone to want to be part of this project.”

Worthley said Burton has notified business neighbors of its potential plans and will likely hold information sessions in the coming weeks to lay out the proposal for nearby residents. The concert venue would be soundproofed to keep the music inside, according to Worthley. He suggested that the soon-to-be-built Champlain Parkway would prevent traffic from disrupting the neighborhood and said the company already has parking lots big enough to accommodate visitors.

If all goes according to plan, Worthley predicted that Talent could move in later this summer, while the rest of the tenants could fill the space by early next year.

“We see this as a way to anchor our presence in Burlington,” Worthley said.
Prev
Next