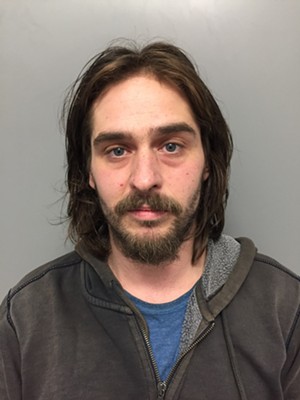 Burlington police arrested a man who allegedly traveled around the Queen City under cover of darkness while giving packages to a child.

But unlike Santa Claus, Jackie Walters wasn't making deliveries. The 33-year-old Burlington resident was allegedly stealing packages from homes in the city's Old North End and Hill Sections. The 11-year-old child Walters brought along was an "unwitting accomplice," according to police.

“The man had been seen roaming the city overnight, allegedly removing whatever packages he could find,” Burlington Police Chief Brandon del Pozo wrote in a press release after Walters was arrested Tuesday morning.

Del Pozo wrote that multiple package thefts were reported last week. "A suspect in several of the thefts was identified as a man riding a bicycle towing a makeshift cargo trailer with a child in it," the chief continued.

Then, around 4 a.m. Tuesday, “a team of plainclothes officers observed a man riding a bicycle matching this description on North Willard Street,” del Pozo wrote. “The officers observed him dismount the bicycle so he could remove a package from the porch of a residence there. He then handed the package to a child in the trailer he was towing and proceeded to pedal from the scene.”

Del Pozo’s statement did not say whether the child is related to Walters, but he wrote that she has been referred to the Vermont Department for Children and Families.

“Walters has been charged with three counts of larceny, and with endangering the child,” del Pozo wrote, noting that Walters had been arrested 15 times before “for larceny and related crimes.”

Del Pozo condemned the decision to involve a young child in the alleged theft operation, calling it "heartbreaking and completely unacceptable.

"This is not the way a child’s sense of innocence about the holidays should be lost," del Pozo wrote.
Prev
Next