Burlington High School Guidance Director Has His Say at Hearing 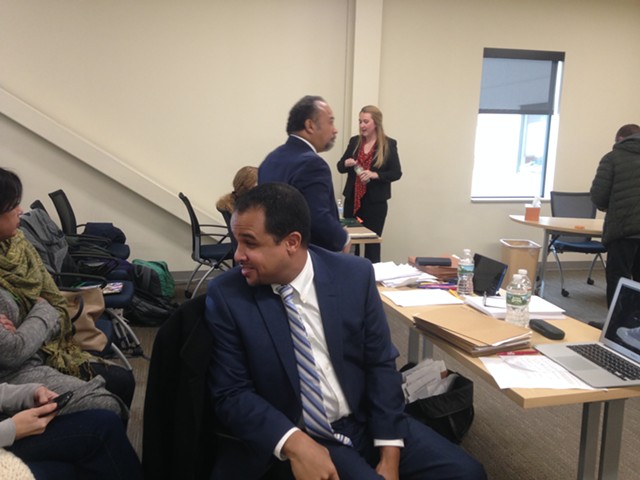 He testified that he never behaved improperly with a student teacher at the school and that he texted her after a faculty party at ArtsRiot in Burlington only to make sure she arrived safely home. There was no sexual intent, he said.

“I love my wife. We have three kids, we have been married for 14 great years and I was offended by the accusations,” Macias said, looking over at his spouse, his father and other family members who attended the hearing.

Macias gave testimony for several hours as he defended himself against allegations of misconduct during a third day of hearings at the Vermont Agency of Education offices in Barre.

The agency cited him for seven alleged violations in September including incompetence on the job, behaving improperly with a student teacher and intimidating staff in his department. Macias was placed on administrative leave shortly after the allegations were made public. He could have his license revoked if the three-member panel hearing the case decides the alleged misconduct is true.

Official Recommends Revoking Burlington Guidance Director's License
By Taylor Dobbs
Off Message
Friday was the first time that Macias has told his side of the story in any detail. He and his attorney, Francisco Guzman, fired back at critics.

Macias said former BHS guidance counselor Yvette Amblo-Bose repeatedly tried to block needed restructuring designed to help underserved students. “She led the rest of the group in fighting everything I tried to do," Macias said.

He added there was a "power struggle" immediately after he was hired in July 2016. Although he was Amblo-Bose's supervisor, she "pretty much ran the department," he testified.

Former Burlington Guidance Counselors Describe 'Toxic' Workplace Under Director
By Katie Jickling
Off Message
Macias acknowledged that during one meeting he told the veteran guidance counselor that "she was the problem" and pointed a finger at her, but contended there was some distance between them. He disputed her testimony during Thursday's hearing that he jabbed his finger at her face.

The Agency of Education launched a year-long investigation after Amblo-Bose and several other members of the guidance department complained publicly at a school board meeting about Macias and left their jobs.

Macias said things were "100 percent better" after they left. For the 2017-2018 school year, Macias hired a new slate of employees who he said accepted the planned restructuring.

Guzman portrayed Macias as a well-credentialed educator with a bachelor's and two master's degrees who never generated complaints during his 20-year career in New Jersey. Macias relocated to Vermont for the BHS job.

To dispute some of the allegations, Guzman and Macias presented a variety of documents as evidence and read aloud from them.

Guzman said a BHS school investigation into the student teacher's complaints about Macias found no cause, though the guidance director conceded that he was asked not to talk to her anymore as a result of the inquiry.

One of the complaints against Macias is that he did not follow protocol while co-proctoring an Advanced Placement exam. Macias testified that five or six students were unwilling to finish the test and were being disruptive.

One had simply drawn a picture on the test rather than answer the questions, he said. Unsure of what to do, Macias testified that he sought advice from Herb Perez, the BHS school administrator who oversees AP testing, who gave him permission to let the students leave early.

Guzman presented a report from the College Board and said it had not found cause to demonstrate that Macias had improperly administered that exam.

The guidance director said he was "taken aback" when the education agency charges were filed against him and said the publicity made it hard for him to perform his job effectively before he was put on leave.

Macias said he presumed either Burlington School Board chair Clare Wool or Vermont Agency of Education investigator Bob Stafford "leaked" to the press the affidavit laying out the alleged misconduct. BHS newspaper the Register broke the story about the investigation in September and other local media soon followed it up. Macias said students immediately started asking him if he was "getting fired."

Wool, who was in the hearing room Friday, told Seven Days she did not leak the document. She declined to comment further.

Stafford, who was also in the hearing room, declined to comment.

Earlier Friday, BHS graduate Mary Markley testified via telephone from her dorm room at Stanford University, where she is a first-year student. Macias was her guidance counselor when she was a senior during the 2017-2018 school year.

Markley testified that she lost trust in the guidance department because Macias was slow to provide recommendations and necessary transcripts for the college application process and for the National Merit Scholarship program. She feared losing out on a $2,500 scholarship because he nearly missed the deadline for submitting a recommendation, Markley said.

During the application process, Macias contradicted himself about what he had and hadn't done multiple times, Markley contended. In some cases, she said, he didn't seem to understand the process. "I couldn't trust him," Markley said, adding that he made applying for colleges "significantly more stressful" than she hoped it would be.

She also related a meeting that she and her mother had with then-BHS principal Tracy Racicot about problems with Macias. He was not invited but repeatedly knocked on Racicot's office door while they were meeting. As they ignored his knocks, he even opened the door, she said. The behavior struck Markley as impulsive and unprofessional, she said.

When Guzman interviewed Markley, he asked questions that appeared to emphasize her success in the college application process — despite any bumps in it she described. Markley confirmed that she had been admitted to six of the eight colleges she applied to and that she had ultimately won the National Merit Scholarship award she sought.

The hearing started at 10:30 a.m. Friday and continued in open session until midafternoon, when the panel went into executive session. The members voted for a private session on the grounds that the testimony would involve private student information.

They came out of executive session at 6:35 p.m. and invited the public back in to announce that the hearing was concluded.

If the panel requires additional evidence, it can still ask for it.

A final decision from the panel is not likely before February, according to an education agency spokesperson.
Prev
Next