A local development group is proposing to build a 100-room Hampton Inn & Suites on Williston Road in South Burlington.

The five-story building would be constructed between the road and an existing 176-room Holiday Inn, which would be renovated as part of the project. Both properties, located near Dorset Street and an Interstate 89 entrance, would be accessed by a new section of city street.

The new hotel would have awnings, an outdoor terrace with public seating and a rooftop overlook, according to the proposal submitted to the South Burlington Development Review Board by the developer, Burlington-based Larkin Hospitality.

The project carries a price tag of more than $16 million, including the cost of the new section of road, said Joe Larkin, a principal at Larkin Realty and Larkin Hospitality. The latter owns 12 hotels, including the Holiday Inn and the Comfort Inn & Suites on the other side of Williston Road. 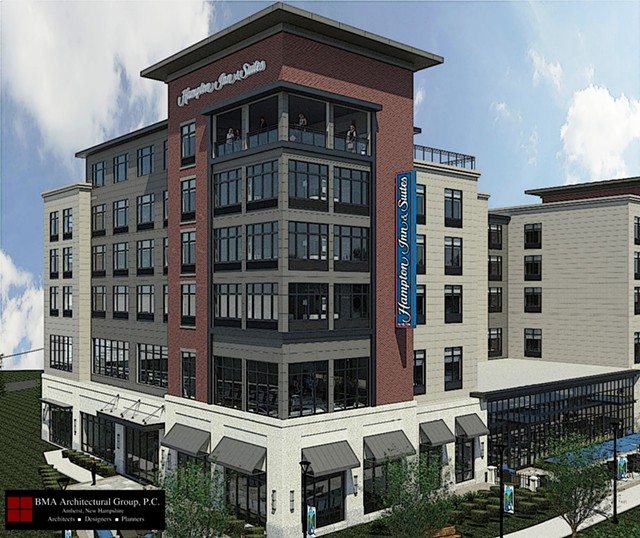 The Holiday Inn needs a facelift and, with the new Hampton Inn next to it, both properties will have a "more urban and more energized" look, Larkin said.

He's confident the additional rooms will fill up, even with competition from several other large hotels nearby and growing bookings on sites such as Airbnb.com.

"We understand that location; we've been operating at the location for the better part of two decades,” Larkin said.

Another new hotel is planned at the nearby Burlington International Airport. If approved by the city of South Burlington, DEW Construction would break ground on that building next year.

Larkin said he hopes to start construction on the Hampton Inn project in the spring and open the new hotel in 2020.

The design would attempt to mesh with the suburb's goal of trying to create a pedestrian-friendly, downtown feel within the city core, according to the application.

The Development Review Board discussed the project December 4 and will do so again December 18. The final approval, though, will not be up to the board. The property sits in a section of the city that is governed by form-based code, a type of zoning adopted by South Burlington in 2016 that stresses urban design with multistory buildings pulled up close to the street, along with sidewalks, benches and bike racks.

In exchange for meeting the requirements, the process is supposed to be more streamlined for developers. Final approval is granted by city planning and zoning director Paul Conner, though other city departments, including the fire department, will review the proposal.
Prev
Next