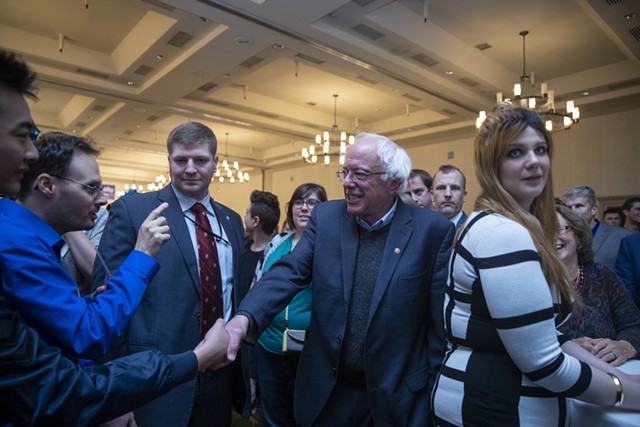 U.S. Sen. Bernie Sanders' (I-Vt.) reelection campaign raised more than $925,000 in fewer than six weeks, according to his latest filing with the Federal Election Commission. Sanders, who easily won a third Senate term in November and is contemplating a second presidential run in 2020, reported spending nearly $730,000 during the same period, from October 18 to November 26.

That leaves him with nearly $8.8 million, which could be transferred to a campaign for president, should he decide to run.

His travel expenses also included a $6,800 payment to the private charter plane company Apollo Jets, as well as $5,000 in carbon offsets to NativeEnergy to compensate for his air travel. According to a previous FEC filing, Sanders spent nearly $300,000 on chartered planes earlier in the campaign season, as VTDigger.org reported last week.

On Monday, Sanders supporters formally launched a federal political action committee called Organizing for Bernie. Cofounder Rich Pelletier, who served as Sanders’ deputy presidential campaign manager in 2016, told Rolling Stone that the group has two goals: “One, we want to show the support is there. The second is to begin to do the organizing that is going to need to happen for him to hit the ground running, by the time he announces — if he announces.”

Sen. Patrick Leahy (D-Vt.), who wasn’t up for reelection, reported $43,200 in contributions. Unlike Sanders, who received 98 percent of his contributions from individuals, Leahy received the majority of his — 64 percent — from PACs. He spent nearly $19,000, leaving him with about $75,500 cash on hand.

Congressman Peter Welch (D-Vt.), who handily beat Republican Anya Tynio on November 6, received $52,000 in contributions, 80 percent of which came from PACs. He spent $22,800, leaving him with more than $2.1 million.
Prev
Next