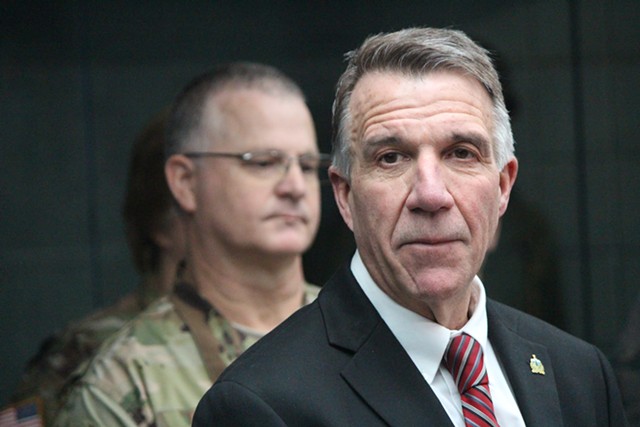 Gov. Phil Scott on Thursday brushed off allegations that the Vermont National Guard is plagued by a culture of sexual impropriety and alcohol abuse, referring to recently reported incidents as the actions of “an occasional bad apple.”

During a press conference at the Guard’s Colchester headquarters, Scott expressed full support for the organization and its leader, Maj. Gen. Steven Cray. Though the governor admitted that reporting by VTDigger.org had brought new allegations to light, he said he saw “no reason to go through an independent review.”

“I want to be very clear,” Scott said, as Cray stood behind him. “My faith and confidence in the women and men of the Vermont National Guard is unwavering.”

According to Cray, that portrait was flawed. “I vehemently disagree with and dispute the negative characterizations of our members and our culture in recent media coverage,” the adjutant general said.

But when Cray was asked whether the stories were factually accurate, the Guard's commanding officer said he could think of only one specific error: the number of reported sexual assaults in recent years. Cray's complaint, he said, was with “the tone and characterization of the culture in the National Guard.” He committed to providing the media a list of other alleged errors following a review.

The series, called “The flying fraternity,” included allegations that a former Guard chaplain had coerced an assistant into sexual activity for years — and, even after an investigation, had been allowed to retire with full benefits. More than 10 women who previously served in the Guard described “a toxic culture” at the organization, according to VTDigger.

The reporting also included allegations that an Air National Guard commander had flown his F-16 to the Washington, D.C., area for a romantic rendezvous; that the Guard delayed hundreds of discharges to inflate its numbers; and that a Guard investigator had been terminated for speaking out about the allegations.

Cray said the Guard was “not a perfect organization” but that it was “committed to improving our culture of dignity and respect.” He said that while privacy policies prevented him from discussing specific situations, “I can say that the cases and individuals that were identified in the articles were investigated, reviewed and adjudicated … In the end, the cases were handled correctly, professionally and appropriate action was taken.” Scott said he learned of some of the incidents shortly after taking office in 2017 and was satisfied that each had been handled properly.

“We are not, at this time, advocating for any independent review,” the governor said. “I’ve spoken to Gen. Cray. I take him at his word. They’re doing everything they can. And I’m convinced that all the procedures and protocols were adhered to.”

But Scott acknowledged that he had not known about all of the allegations until VTDigger published its series.

“I think you’ve done a pretty good job in providing transparency and have brought a lot of these to light,” he told VTDigger founder and editor Anne Galloway, who was present for the press conference.

Asked how to square his own praise for VTDigger’s reporting with Cray’s condemnation of it, Scott said, “Well, again, I’m saying, you know, the media has a role to play, and they’ve brought a lot of things to light.” He added, “You know, I wouldn’t have heard about some of it had Digger not written about it.”

Nevertheless, the governor said, he was now certain he understood the full picture. “I’m not convinced there is any more and I’ve spoken to Gen. Cray, asked him pointedly about that.”

Cray also addressed the Guard’s decision to remove VTDigger from its media distribution list during the reporting of the series. He said he personally approved the move. “I wanted to send a message that said that I did not agree with the tactic of having [a VTDigger reporter] call a survivor and do harm to that individual,” the general said.

In a statement issued Thursday evening, Galloway and her fellow editors took issue with Cray’s explanation. They wrote that the news outlet had been removed from the list on September 28 and that it had not contacted the survivor in question until mid-October. VTDigger “followed journalistic best practices” in balancing “sensitivity to victims and the need to report on their abuse,” the editors wrote.

In a separate interview, Galloway said that VTDigger stood by its reporting, which she said was based on the accounts of 24 current and former Guard members. She said she was “very disappointed that Gen. Cray was unwilling to sit down with us [for an interview] because we want to be holistic in our reporting and we want to show all sides of the story.”

The Guard has since restored the news organization to its press list. During the press conference, Scott said he “didn’t agree with the decision” to remove VTDigger. “I think Gen. Cray knows that at this point,” the governor said. “I believe it should be an open process.”

Cray told reporters that his recent announcement that he would not seek a fourth two-year term as adjutant general was unrelated to the controversy. He said he “had certainly been talking to the governor, legislators, my senior leadership team and whatnot to fully expect that there would be a transition after my third term.” The governor confirmed that he had learned of Cray’s plans roughly three months ago.

Cray, who has served in the Guard for nearly 34 years, said, “I literally grew up in this organization and will hold my head high when I retire in March.”
Prev
Next