Hundreds Rally in Burlington to Protect Mueller From Trump | Off Message

Hundreds Rally in Burlington to Protect Mueller From Trump

Hundreds of demonstrators gathered in Burlington Thursday evening to protest President Donald Trump’s firing of Attorney General Jeff Sessions. The event was one of 11 "Nobody Is Above the Law" protests across Vermont, organized to pressure Congress into protecting the independence and integrity of the ongoing investigation by Special Counsel Robert Mueller into Russian interference in the 2016 election.

Protesters chanted, "Two, four, six, eight, we want Mueller to investigate," and "Let Bob do his job," as they marched a winding route through downtown Burlington. Police escorted the protest, which blocked rush hour traffic. Some drivers honked in support of the demonstrators as they passed.
As the hundreds of sign-waving protesters massed outside Burlington City Hall, staffers for Rep. Peter Welch (D-Vt.) and Sens. Patrick Leahy (D-Vt.) and Bernie Sanders (I-Vt.) all read statements from their respective bosses.

John Tracy, Leahy’s state director, told the crowd that grassroots activism like theirs “may very well prevent a Constitutional crisis.”

Reading a statement from Leahy, Tracy said Sessions’ replacement, acting Attorney General Matthew Whitaker, “has spent years as a partisan political operative. He has heavily criticized the Special Counsel’s investigation. He has publicly discussed defunding it.”

The crowd erupted in cheers when Leahy’s statement made a clear demand: “Mr. Whitaker needs to recuse himself from the Russia investigation. And do so immediately.”

Ryan McLaren, a Welch staffer who uses a wheelchair due to partial paraplegia, stood and leaned against a railing to read his boss' statement. “If this isn’t worth standing for, what is?” McLaren quipped, generating cheers from demonstrators gathered below. 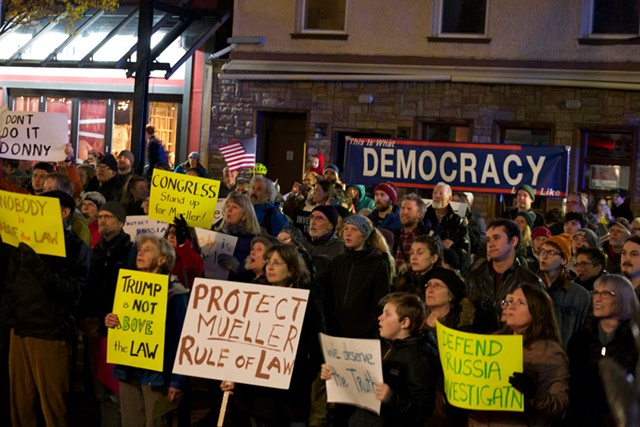 Welch’s statement called Sessions “one of the worst attorney generals in history,” but said his firing is a threat to democracy.

“While I am glad to see [Sessions] go, his departure further jeopardizes the credible investigation by Robert Mueller into efforts during the 2016 election to undermine our democracy,” it read. “It is vital that this investigation reach its conclusion without political influence or intimidation.”

Welch also called on Whitaker to recuse himself immediately.

Leahy, Welch Say Acting AG Should Recuse Himself From Mueller Probe
By Paul Heintz
Off Message
Sanders staffer Jessica Early delivered his statement, which called on Congress to act immediately to protect the Mueller investigation.

“The American people must be absolutely confident that the president is putting their needs first,” Early read, drawing some chuckles from the crowd. She continued: “It’s a disgrace that that isn’t the case.”

“We are propelled by the desire to save our democracy,” she said.

Kunin said the explanation for Sessions’ firing was simple.

“He said no to the president who wants his minions to answer yes,” she said, referring to Sessions’ decision to recuse himself from the Russia investigation.

Kunin said Whitaker is clearly biased against the investigation, and his appointment was like a “fox guarding the hen house.”

“I would call it more of the weasel guarding the hen house,” Appel said, referring to Whitaker.

“We gotta be active, we gotta be aware,” he said, “because this is a slippery slope and we’re sliding down it.”

An email from the Burlington nonprofit Peace & Justice Center, which organized the Vermont events, said the protesters had three demands:

Jeanne Keller, one of the organizers, told the crowd that they don't have any more events planned yet, but they don't plan to stop. The Peace & Justice Center is holding a planning meeting next Monday at noon to discuss how to maintain pressure on elected officials to protect Mueller's investigation.
Prev
Next