by Alicia Freese and Paul Heintz Vermont's major-party candidates for governor crisscrossed the state Monday on the final day of campaigning before Tuesday's election.

During a 14-hour tour of all 14 counties, Republican Gov. Phil Scott committed to making Vermont a more affordable place to live if he were reelected to a second two-year term. Democratic challenger Christine Hallquist, who traveled from Bennington to St. Johnsbury, touted her universal broadband plan and told voters she'd be a more collaborative leader than the incumbent.

The two candidates have waged a civil but spirited campaign since winning their respective primary elections in August. While early voting figures provided by the Secretary of State's Office indicate that turnout will be higher than usual for a midterm election, a Vermont Public Radio/Vermont PBS poll conducted early last month suggested that Scott and fellow incumbents have no cause to worry.

In addition to the gubernatorial contest, Vermont's ballot features races for a U.S. Senate and a U.S. House seat, five other statewide offices and all 180 legislative seats. Voters will also elect county officials, such as sheriffs and state's attorneys, to four-year terms, and they'll weigh in on a variety of local ballot initiatives.

Since Scott first ran for lieutenant governor in 2010, he has made a tradition of setting foot in every Vermont county on the eve of a general election. Starting at 4:30 a.m. Monday at a convenience store in his hometown of Berlin, the governor headed north to Morrisville and Orleans and then traced a clockwise path around the state.

"I don't know how many more campaigns he or I will want to do," Scott said of Tucker, a veteran of the campaign trail.

Outside the car dealership, the governor and his wife, Diana McTeague Scott, held the dogs' leashes and waved to southbound traffic on Route 7. Reflecting on his reelection bid, the candidate said, "You never know what's going to happen, but I'm proud of the race we've run."

A few feet away, two other GOP candidates for top statewide offices hoisted signs and waved at passing motorists. Rep. Don Turner (R-Milton), the Republican nominee for lieutenant governor, and Rep. Janssen Willhoit (R-St. Johnsbury), the party's pick for attorney general, tagged along for all 14 stops of Scott's tour.

"We're in the home stretch now," a weary Willhoit said.

Turner, who is challenging Progressive/Democratic Lt. Gov. David Zuckerman, said he hoped his message of fiscal restraint would resonate with voters. "I've got a strong record," the House minority leader said. "If they think it's too expensive to live here, I've proven that [I] will stand up against raising taxes and [for] fiscal responsibility ... That's what I've done my whole career."

Turner said he expected a “very, very close race.” Though he has run a competitive, highly visible campaign and raised more money than Zuckerman, the public media poll showed the Republican challenger trailing the incumbent by double digits.

“David and I had a positive campaign,” Turner said. “One thing I hope is that in five years or 10 years, people will look back at this race and say, ‘Hey it was a good race with formidable candidates.’” Less than two miles north of the Republican gathering, Zuckerman and Democratic Attorney General T.J. Donovan stood with roughly two dozen supporters holding signs and waving to commuters at the intersection of Route 7 and Interstate 189 in front of a Buffalo Wild Wings franchise.

Zuckerman and Donovan had spent the weekend campaigning throughout the state with Hallquist, U.S. Sen. Bernie Sanders (I-Vt.), U.S. Rep. Peter Welch (D-Vt.) and other members of the Democratic slate. But both men had taken a break from the trail earlier Monday. Zuckerman said he'd spent part of the day processing and delivering produce from his Hinesburg organic farm, while Donovan said he'd been writing thank-you notes to supporters.

"It's been a good campaign," said Donovan, a first-term AG from South Burlington who previously served as Chittenden County state's attorney. "Janssen and I had some good debates. I think we kind of raised the profile of the issues we care about and the office, so I feel good." Zuckerman said his message hadn't changed since he first ran for state representative two decades earlier. "I've worked hard for boosting the rural economy," he said. "I've worked really hard to just make sure our democracy is respected and all voices are heard."

The Progressive/Democrat said he was not taking his reelection for granted but was "feeling pretty good" about his chances. “Turnout is up tremendously and I think Vermonters tend to lean more my direction when it comes down to the issues," he said.

Earlier Monday afternoon on the other side of the state, Hallquist spent an hour campaigning at the Tuckerbox Café, a Turkish and Mediterranean restaurant in White River Junction.

Hallquist, who at 3 p.m. was on her third stop of the day, also hit all 14 counties, though she did so over the course of three days and without the company of canines.

The Democratic nominee addressed a crowd of about 30 people, most of whom were women. Declaring Tuesday’s election a referendum on Vermont’s future, Hallquist told her audience, “It’s a choice between compelling vision about a prosperous future or continued stagnation and decline.”

That message went over well with Sarah Kersey of Norwich, who described Scott as “kind of static.” She added, “He reminds me too much of [former governor] Jim Douglas.”

Kersey, who described herself as “somewhere in between gender variant and transgender,” said she would have voted for Hallquist regardless of the candidate's status as the first transgender major party nominee for governor. But, referring to Hallquist's public transition in 2015, Kersey added, “I think she has a lot of courage.”

Hallquist's historic candidacy has attracted national media coverage but not an influx of outside money. Fundraising has been lackluster on both sides: Hallquist has raised $507,451, while Scott has raised $688,521 — far less than the roughly $1.5 million he took in during his 2016 campaign.

At the White River event, Hallquist drew attention to the support Scott has received from the Republican Governors Association, suggesting "national GOP tactics are here in Vermont." 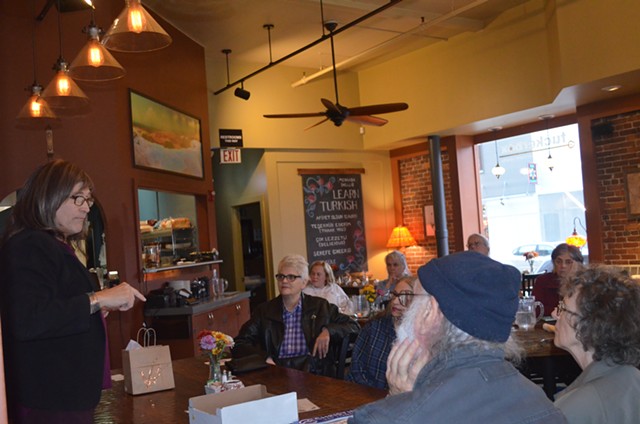 After a brief stump speech, Hallquist took questions from the audience. The first came from a woman who wanted to know if Hallquist would stay involved in politics even if she loses Tuesday.

“I never do anything with a back-up plan,” Hallquist responded. She later gave a more traditional answer, telling the woman that she would “look for the next opportunity to make the biggest impact I can.”
Prev
Next