The mailer, obtained by Seven Days, was sent by A Stronger Vermont, which is operated by the national Republican Governors Association. The price tag for the flyer, according to campaign finance reports: nearly $60,000.

Hallquist is not pictured at all; instead, there's a stark image of the Statehouse in weather conditions that are either highly unusual or, frankly, Photoshopped. A bright sun shines down on the iconic building, but the skies behind are dark and threatening. The reverse side features a rather unflattering picture of Scott that would seem more appropriate in an attack ad.

The mailer's focus is entirely on taxes, and its claims are misleading and exaggerated but not entirely untrue. Scott is credited with championing an income tax cut. True, but leaders of the Democratic legislature were equally enthusiastic about the measure, which was a corrective to unintended consequences of President Donald Trump's 2017 tax cuts.

The mailer accuses Hallquist of planning to raise taxes on income, gasoline, payroll and small farmers.

The income tax increase is part of a plan to shift public school funding from property to income tax. As proposed, the plan would raise income taxes but reduce property taxes with a net-neutral effect.

The payroll tax hike would fund a statewide paid family leave program. Supporters argue that the program would provide economic security to working Vermonters and a more stable workforce for employers.

The gas tax charge refers to ideas for carbon pricing, a.k.a. carbon tax. In an interview on WDEV Radio's "Dave Gram Show" cited as proof, Hallquist said she is "open to" the idea but did not endorse it, and emphasized that "the last thing we ought to do is increase the cost burden to Vermonters."

The mailer's second citation is to a news account about the ESSEX Plan, which would include a carbon tax as part of an effort to speed Vermont's transition to renewable energy. The article does not mention Hallquist, who was not a candidate for governor at the time. She has not endorsed the ESSEX Plan. 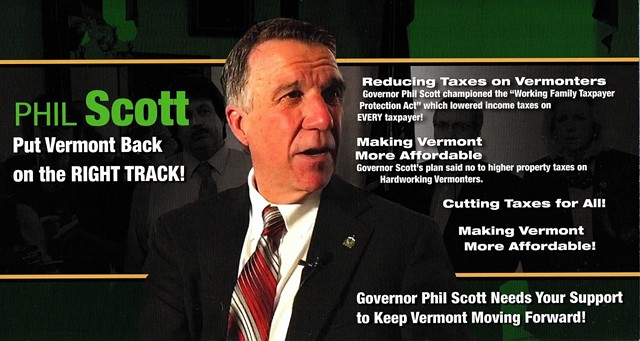 As for the tax on small farmers, it's an apparent reference to State Treasurer Beth Pearce's plan for reducing phosphorus runoff into Vermont's waterways. The plan calls for a statewide per-parcel fee, which small farmers would pay along with every other property owner.

Hallquist has praised Pearce's plan, but has not endorsed it. In the cited St. Albans Messenger article, Hallquist talked of working with the legislature to identify a funding source: “Where are we going to come up with the money? We’ll figure that out as a group.”

In 2016, the RGA spent more than $3 million on behalf of Scott, most of it on massive TV ad buys. So far this year, the RGA has reported spending a relatively puny $672,000 in Vermont for TV and online advertising plus $38,000 on polling.

Outside organizations have failed to step up for her campaign. As of Thursday afternoon, the total spending on behalf of Hallquist by out-of-state groups comes to a measly $10,769, all for online advertising. If Hallquist was hoping for an influx of funds from the Democratic Governors Association or other national groups, it has yet to materialize with less than one week until Election Day.
Prev
Next