'I Cried as I Read This': An Obit for an Addicted Vermonter Goes Viral | Off Message

'I Cried as I Read This': An Obit for an Addicted Vermonter Goes Viral 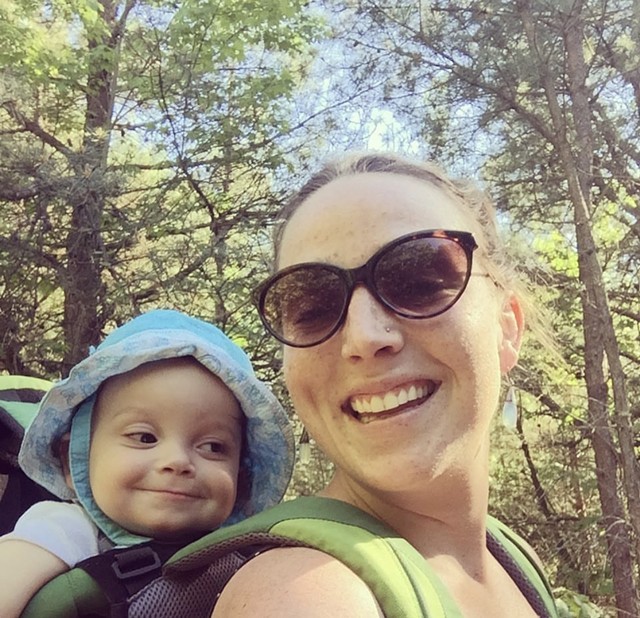 Kate O'Neill sat at a table at her sister Maura's home in Shelburne last week, wrestling with a task she had hoped never to have to do: writing an obituary for their sister, Madelyn Ellen Linsenmeir. The Burlington native struggled for more than a decade with drug addiction before dying on October 7 at age 30.

In two hours, O'Neill produced a work that read more like a nonfiction call to arms than an obituary. In keeping with her family's long-standing candor about Linsenmeir's struggle, the obit documented with heartbreaking honesty a tale of addiction that began when Linsenmeir first tried OxyContin at 16, and continued after she gave birth to a son who was eventually taken from her.

"It is impossible to capture a person in an obituary, and especially someone whose adult life was largely defined by drug addiction," O'Neill wrote in the obituary, which was published in Seven Days, the Burlington Free Press and on Legacy.com. "To some, Maddie was just a junkie — when they saw her addiction, they stopped seeing her. And what a loss for them. Because Maddie was hilarious, and warm, and fearless, and resilient. She could and would talk to anyone, and when you were in her company you wanted to stay."

Obituary: Madelyn Linsenmeir, 1988-2018
Obituaries
The family hoped their candor would get some attention and help ease the stigma about drug addiction. But they never expected the obituary would rocket across the internet and reach millions of people.

The obit was viewed more than 3.2 million times on sevendaysvt.com, and threatened to crash the site.

Linsenmeir's family is not the first to candidly discuss drug addiction in an obituary. Seven Days wrote in 2016 about the practice. Other obituaries published in Vermont more recently have made it clear that the deceased had been an addict.

Yet none have generated the massive attention that Linsenmeir's has. Her family, among others, have pondered why.

There could be a few explanations. The photograph published with the obituary — and this story — is an irresistible shot of Linsenmeir and her son wearing adorable grins.

And O'Neill, who works in communications and editing, wrote unflinching and compelling prose:

During the past two years especially, her disease brought her to places of incredible darkness, and this darkness compounded on itself, as each unspeakable thing that happened to her and each horrible thing she did in the name of her disease exponentially increased her pain and shame. For 12 days this summer, she was home, and for most of that time she was sober. For those 12 wonderful days, full of swimming and Disney movies and family dinners, we believed as we always did that she would overcome her disease and make the life for herself we knew she deserved. We believed this until the moment she took her last breath. But her addiction stalked her and stole her once again. Though we would have paid any ransom to have her back, any price in the world, this disease would not let her go until she was gone.

And, as Burlington Police Chief Brandon del Pozo noted in a Facebook post that has also received significant national interest, Linsenmeir was an attractive, young, white female, defying many stereotypes of addicts.

"If Maddie was a black guy from the Bronx found dead in his bathroom of an overdose, it wouldn't matter if the guy's obituary writer had won the Booker Prize, there wouldn't be a weepy article in People about it," del Pozo wrote.

O'Neill agreed, saying, "It's much harder to feel empathy ... for people who don’t resemble Maddie."

The obit clearly resonated for many readers. As of 7 p.m. Thursday, 763 people had commented on it at sevendaysvt.com. Many commenters shared their own stories about addiction.

"I cried as I read this and for a long time after," wrote "sthomp64" in a comment that echoed many. "I have three sons, all addicted to opiates ... [T]he first thought of every day is will this be the day I get the call? My heart breaks for you and your family with this tremendous loss and all of the years of pain you all endured preceding her death. May she fly forever free of the demons that dominated her life."

Thursday, O'Neill reiterated that the family had always believed she would get better. "The real hope now is with policy makers and politicians, and that’s what we have to do now, translate that hope into action."

The family still has unanswered questions about Linsenmeir's death and her final days.

During her stay in Burlington this summer, Linsenmeir lived with her mom, Maureen. She watched Disney movies, swam at the Bolton Potholes, cooked chowder and relaxed, O'Neill said. And then in late August, as she so often had in the past, Linsenmeir disappeared.

The family got a phone call earlier this month, O'Neill said: Linsenmeir had been arrested. She was unconscious in a hospital in Springfield, Mass. O'Neill and other family members stayed by her bedside for days. They are waiting to find out more about what caused her death.

Linsenmeir, who lived in the Burlington area on and off throughout her life, went through "dozens" of cycles of getting clean and relapsing, her family members said.

Her longest periods of sobriety came after her son, Ayden, was born in 2014. She stayed clean for six months, relapsed, and then managed another 11 months. Eventually, she lost custody of her boy.

"If will alone could have kept her sober, she would have stayed clean," said O'Neill, a Philadelphia resident who worked as a proofreader for Seven Days from 2008 to 2012. "She would have done anything for him, and that’s the one thing she could not do. Will is not enough to keep someone clean."

While preparing for Linsenmeir's funeral this weekend, her family is hoping that all the attention leads to action, including improved access to drug treatment inside and outside prison. They also want the criminal justice system to do more to help, instead of punish, addicts.

But that is for another day. This week, the family has spent much of their time discussing their final tribute to Linsenmeir.

Many of the stories and online comments have noted the obituary's haunting closing lines. "Our grief over losing her is infinite. And now so is she."

O'Neill said those words were fueled by a sentiment that has stirred for years inside those who loved Linsenmeir.

"One of the things that’s given us comfort is to know that Maddie is free from this darkness and intense struggle that she's been in for the past decade," O'Neill said. "In a way, it feels like she is free from it, and if our grief is the only price we have to pay for that freedom, I would gladly take it."
Prev
Next