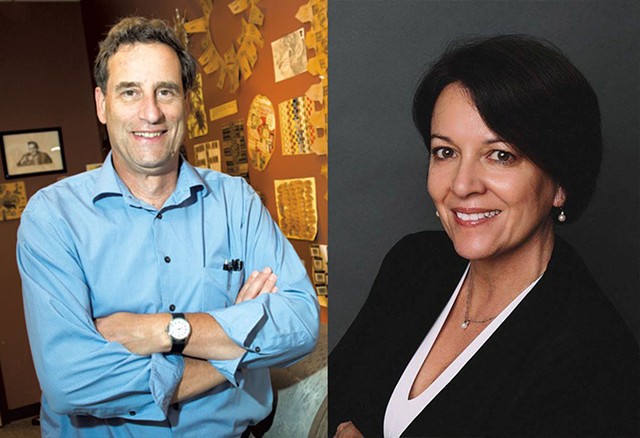 Conspicuous by his absence from the invitation: Peter Briggs, a 28-year-old selectboard member from Addison and the Republican candidate in the Senate race.

Audet and Ralston's joint campaign committee organized the event. The independents announced their candidacies together in late July.

Ralston, a former Democratic state representative, has said that he supports Scott. He explained in July that he and Audet teamed up because they would be "running against a party establishment and that party has a lot of resources."

He was speaking of the Democratic Party, which currently holds both of the county's Senate seats: Incumbent Sen. Chris Bray is seeking reelection; Sen. Claire Ayer is retiring. The other Democrat in the race is Ruth Hardy, executive director of Emerge Vermont, a nonprofit that recruits and trains Democratic women to run for office.

Ralston, a New Haven resident, is the owner of Vermont Coffee Company. Audet is a dairy farmer from Bridport.

Independents Turn Up the Heat in Addison County Senate Race
By Taylor Dobbs
Politics
The event will be held at Champlain Valley Equipment in Middlebury. In addition to refreshments, speeches and solicitations, those in attendance will be treated to "a precision excavator challenge" between Scott and Ralston, according to the announcement.

Ralston said the excavator challenge was actually the starting point for the event. "We wanted to show that an independent candidate can beat a major party candidate," he explained, so he issued the challenge to Scott.

Ralston said he isn't expecting a gubernatorial endorsement. "The governor's got his own race to run," Ralston said. "We're independents. We're not accepting endorsements."

At the same time, Ralston threw some shade at the Dems, accusing them of trying to depict the two independents as undercover Republicans. "When they want to insult someone, they call them a Republican," Ralston said.

When asked about the event at a press conference Thursday, Scott played a little dodgeball.

Are you endorsing Ralston and Audet? "Well, you'll find out on October 2nd," Scott responded.

Is Briggs going to be there? "I am not aware of who's invited to that event."

Should he be invited? After all, he's a fellow Republican. "I am not aware of who's invited to the event at this point."

From a Machiavellian standpoint, Scott's support for a pair of label-free centrists makes sense. The last time a Republican won a Senate seat in Addison County was in 2000. Ralston and Audet, running as a ticket, might fare better than a Republican. In this scenario, Briggs would be nothing but a spoiler. The more votes he receives, the less likely that both Democrats would be defeated.

Briggs did not immediately return calls for comment. According to Ralston, Audet is attending The Big E, an agricultural exposition in Springfield, Mass., and is unavailable for comment.
Prev
Next