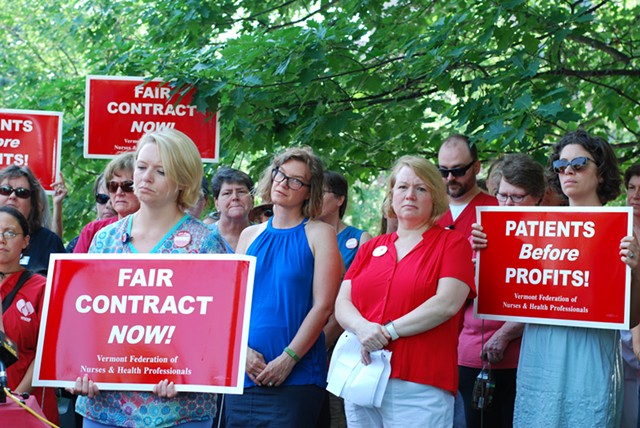 The University of Vermont Medical Center and its nurses' union have reached a tentative contract agreement after months of failed negotiations, the parties announced late Wednesday.

UVM Medical Center said the agreement with the Vermont Federation of Nurses and Health Professionals is a three-year contract that includes a 16 percent average base salary increase. The union, in turn, agreed to eliminate proposed increases to certain shift differentials. Pay increases for ambulatory nurses will be retroactive to the first full pay period in September, the hospital said.

"We believe this agreement provides meaningful wage increases and allows us to maintain our commitment to all employees and be responsible stewards of limited health care dollars," hospital spokesman Michael Carrese said.

"We are proud of the unity, strength, and perseverance our nurses have shown," said Molly Wallner, lead negotiator for the union. "This has been a long and difficult road for all of us, and we are proud of what we have accomplished. Our fight for patient safety is not over, and we will continue that fight through the legislature."

The 1,800-member union went on strike July 12, rejecting an agreement that would have provided a 14 percent pay bump over three years. After the 48-hour strike, the nurses returned to work without a contract. Numerous bargaining sessions had failed to produce an agreement before this week. At one point the union sought a 22 percent pay hike.
Prev
Next