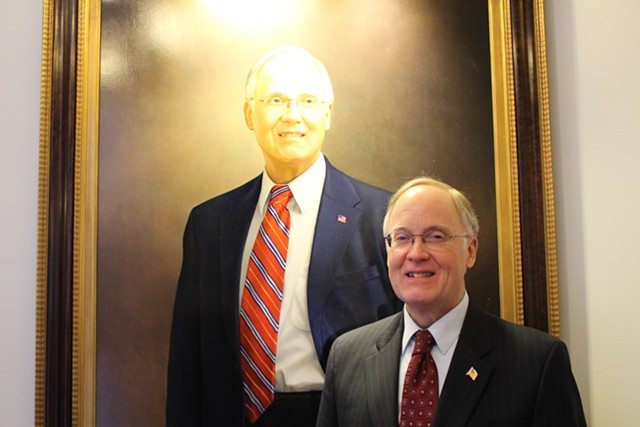 Jim Douglas hasn’t been on a statewide ballot since 2008 but “Jim Douglas for Governor” is still appearing on campaign finance filings with the Vermont Secretary of State.

According to those filings, the account bestowed $500 upon House Minority Leader Don Turner Jr. (R-Milton) in his run for lieutenant governor. It also doled out $500 to Gov. Phil Scott, while Chittenden County Republican Alex Farrell’s campaign for state Senate got $250. Rep. Heidi Scheuermann (R-Stowe) received $100.

But the four-term Republican governor says he isn’t seeking a political comeback.

“Don’t worry, I’m not waging a write-in campaign or anything,” Douglas said with a chuckle. “Believe me.”

The explanation? Douglas, who left a legacy of fiscal restraint as governor, has held onto his 2008 campaign funds for about a decade.

“I’ve still got a very modest balance in my campaign account, so I make donations from it as I choose to,” he said. “But it’s drying up — it won’t last much longer.”

Less than $1,000 doesn't last very long in most campaign accounts, but there's nothing stopping the former gov from holding onto some of that cash for 2020 and beyond.

Will Senning, the director of elections at the Secretary of State’s office, said the donations are perfectly legal.

“After an election, you have surplus in your campaign account,” he said. “If [candidates] don’t immediately give it away, there’s no prohibition in keeping surplus money from a campaign in that account ... so it sits there in that same account that they registered with us whenever they actually ran for office.”

Several years ago, former candidates who donated more than $500 from their campaign accounts in an election cycle triggered the same reporting requirements as current candidates. That means filing reports with the Secretary of State's office at least eight times in election years, even if there's no new activity.

“There’s a status now you can identify yourself at the beginning of the election [cycle] as a former candidate that is not actively running,” Senning said. “Once you’ve done that … then you just file a single report at the end of the cycle with any activity.”

Under state law, leftover campaign money can only be contributed to charities or to other political candidates, parties and political action committees. Cash can also help fund the operations of the Secretary of State’s office, “but nobody ever seems to do that,” Senning quipped.

Douglas isn't the only former candidate registered with the Secretary of State's office, though his campaign seems to be the only one reporting recent activity. Former Democratic gubernatorial candidates Matt Dunne and Sue Minter have registered, as has Douglas' successor, Peter Shumlin.

Senning said his reading of state law prohibits former candidates from fundraising into their campaign accounts and then funneling that money to candidates they support. That means, in order to keep the “former candidate” designation, he said, pols need to spend leftover money — but not raise more.