I am a change maker. That was what Aden Haji, 23, hoped each attendee would feel about themselves after attending a town hall event Sunday in Burlington that featured Sen. Bernie Sanders (I-Vt.) as the headliner.

Haji, a University of Vermont senior, was one of the speakers at the event and called for greater civic engagement from members of New American communities.

The gathering at the Old North End Community Center specifically targeted New Americans and was intended to teach them the nuts and bolts of voting, to inspire them to become politically engaged, and to give them an opportunity to make their concerns known to Sanders. It attracted a crowd of about 150 people, most of whom were members of the Burmese, Bhutanese, Iraqi, Somali and Sudanese communities.

It was Haji and his friend, Ahmed Noor, who suggested to volunteers for Sanders' campaign office that they organize such an event.

"There's a lot of Somali Bantu guys [who] talk about politics, but they don't even vote," said Noor, a senior at UVM.

The 22-year-old student first voted during the 2016 presidential elections, he shared: "I felt like I finally got to say my opinion."

As he watched the hall fill up, Noor said he was "so excited" by the outpouring of interest. Having Sanders appear made the event "even better," he continued.

Staffers from the Burlington School District, Vermont Refugee Resettlement Program and the Association of Africans Living in Vermont were among those in attendance. State Sen. Chris Pearson (P/D-Chittenden) and Lt. Gov. David Zuckerman, a Progressive/Democrat, also mingled at the event. Both politicians are seeking reelection this November.
The event kicked off with an introduction from Sandrine Kibuey, the associate director for Chittenden Community Action at the Champlain Valley Office of Economic Opportunity. A former asylee from the Democratic Republic of Congo, Kibuey shared her own immigration story before urging attendees to go to the polls and hold elected officials accountable.

Hemant Ghising, who works in the central office at the Burlington School District, and Barb Prine, a longtime Sanders' campaign volunteer, took the stage next to talk about voter rights and education. 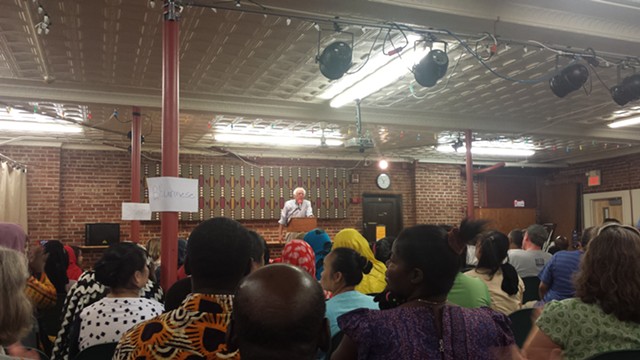 He urged the crowd to step up and run for office. Dieng said he's part of a network of New American leaders who will send candidates to run in future state legislative, mayoral and congressional races. He went on to introduce Sanders as the "most progressive senator of our time" who fights for "the most vulnerable."

Once at the podium, Sanders told the crowd that he's a first-generation American and that his father came to the U.S. from Poland at age 17 with no money and little English. "So, I have a little bit of understanding of what it means to come to this country as a New American," he said.

Stressing the common humanity of every individual, Sanders went on to highlight some of the issues for which he's fighting, including raising the minimum wage to $15 an hour, lowering the cost of prescription drugs, and making public colleges and universities tuition-free. He also called on New American parents to encourage their children to pursue jobs in the professional health care sector.

Vermont's junior senator went on to take a couple of questions from the audience. A Somali audience member told Sanders that he hadn't seen his mother in 20 years. But Somalia is one of the countries on President Donald Trump's travel ban list, he continued.

Sanders agreed that the policy is "discriminatory and racist" and directed one of his staffers to take down the man's information and vowed to have his office follow up.

The program ended about 45 minutes earlier than scheduled, and many in the crowd didn't have the opportunity to have their questions answered.

"We did shorten a few portions of the program because it was so hot in there and we were concerned about the wellbeing of the attendees," Sanders' campaign manager Shannon Jackson said in a phone interview.

Every speaker got his or her chance to talk, Jackson noted.

"We did collect all the questions at the end, and our staff will be following up," he continued. "We are looking forward to additional town halls."
Prev
Next