Montréal Man Gets Four Years for Smuggling Guns Through Library 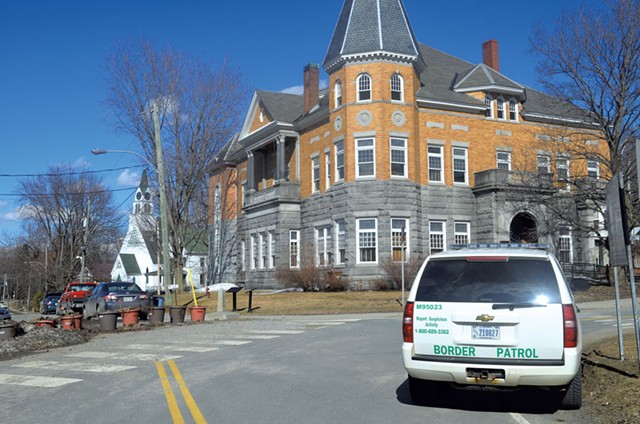 A federal judge on Tuesday sentenced a Montréal man to more than four years in prison for smuggling 100 firearms through a bathroom in the Haskell Free Library and Opera House, which straddles the international border in Derby Line.

Alexis Vlachos, a career criminal who pronounced himself a reformed man during a U.S. District Court hearing, will likely be released from prison in the coming weeks after receiving credit for time served and good behavior. He plans to work at his father's restaurant, lawyers said.


Vlachos, 41, led a three-man operation that bought 100 handguns from licensed dealers in Florida. In March 2011, the coconspirators traveled to Vermont and left several firearms in the library, which is famously bisected by the international border.


Vlachos allegedly walked to the library from Québec, grabbed the guns and walked back into Canada without stopping at a border checkpoint. He was arrested in February 2015 by Canadian authorities who, while investigating him for the gun smuggling, found him with a hockey bag full of smuggled cartons of cigarettes.

"I was blinded by easy money, greed, selfishness and opportunism," Vlachos told Judge William Sessions III. "Definitely, I'm not the same person." He apologized for violating "the trust ... of our two great nations."

Vlachos was supposed to be sentenced in August, but his criminal record complicated matters. Federal courts in the U.S. use a complex sentencing formula that takes into account prior convictions. At issue was how his numerous convictions in Canada under that country's laws, including for breaking and entering, sexual assault and robbery, should affect his U.S. sentence.

Citing Vlachos' criminal history, Assistant United States Attorney Joseph Perella argued for a 104-month sentence, roughly one month per firearm. "If there is a criminal opportunity that presents itself, he's going to jump on it, and do it pretty well, because he's pretty experienced," Perella said.