Leahy at Kavanaugh Hearing: 'What Are We Hiding?' | Off Message

Leahy at Kavanaugh Hearing: 'What Are We Hiding?' 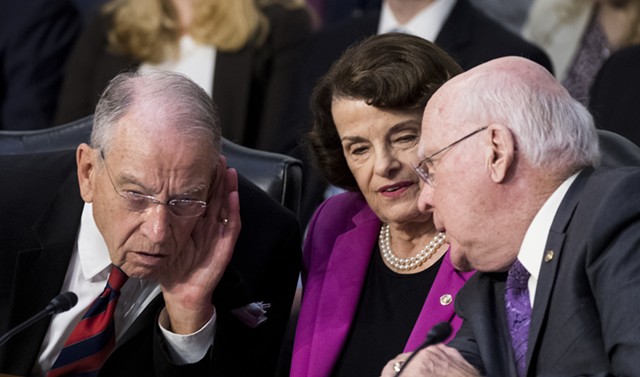 "This is the most incomplete, most partisan and least transparent vetting for any Supreme Court nominee I have ever seen," said Leahy, a former chair of the committee who has taken part in 19 confirmation hearings. "And I’ve seen more than anyone else in the Senate."

Even before the current chair, Sen. Chuck Grassley (R-Iowa), could introduce Kavanaugh, a federal appeals court judge, Democratic members interrupted the proceedings to demand their postponement. One by one, they talked over Grassley — criticizing him for failing to request some of Kavanaugh's records and for allowing others to be kept confidential.

As protesters shouted from the gallery, Leahy interjected to ask, "What are we trying to hide? What are we hiding? What's being hidden?"

The senior senator bemoaned what he called a degradation of the confirmation process.

Republicans, meanwhile, criticized Democrats for what they called a lack of decorum. Sen. John Cornyn (R-Texas) accused them of "mob rule." Grassley ignored Democratic pleas for a vote to delay the hearing and pushed on with opening statements.

During Leahy's statement, the Vermonter ticked through a list of grievances with the committee's Republican leadership. Those included its unwillingness to request all records relating to Kavanaugh's tenure as president George W. Bush's staff secretary and its willingness to allow a Bush administration official to omit and redact other records. Leahy noted that committee members had received one batch of records — totaling 42,000 pages — the night before the hearing began.

"The notion that anyone here has properly reviewed [the records] or even seen them at all is laughable. It's laughable. It doesn't pass the giggle test," said Leahy, who has not explicitly stated whether he would vote for or against Kavanaugh's appointment. "That alone would be reason to postpone during normal times. But nothing about this is normal."
Prev
Next