Petunias and a Parklet: Cities Get Creative in Bids to 'Calm' Traffic | Off Message

Petunias and a Parklet: Cities Get Creative in Bids to 'Calm' Traffic

by Molly Walsh and Katie Jickling 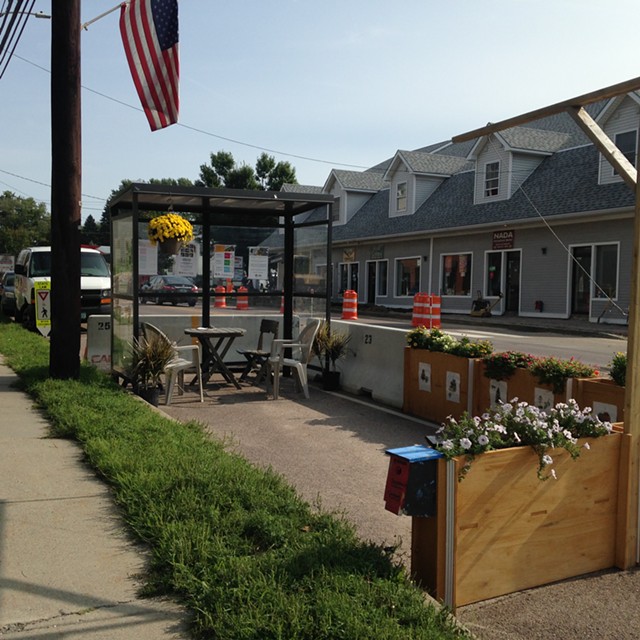 Burlington officials have used snapdragons and petunias to reclaim bits of streets that vehicles once used. Winooski planners upped the ante, setting up that city's first-ever "parklet" in parking spaces along busy North Main Street.

The goal in both cities is to reclaim small spaces from vehicles, slow drivers along busy routes, and make people on bikes and foot feel safer.

Winooski's parklet popped up on upper Main Street earlier this month. It looks like a small outdoor living room and occupies two curbside parking spaces. A bus stop-like enclosure anchors one end, while thigh-high wooden planters and Jersey barriers set it off from traffic. A table and chairs are set up in a corner, and "parklet" is scrawled on a wall below a cascade of white petunias.

No one was there Tuesday morning as cars whooshed by. Several events have been scheduled, including a "library in the parklet" Wednesday, August 22, from noon to 2 p.m. The city is encouraging community groups to get in touch to host programs. 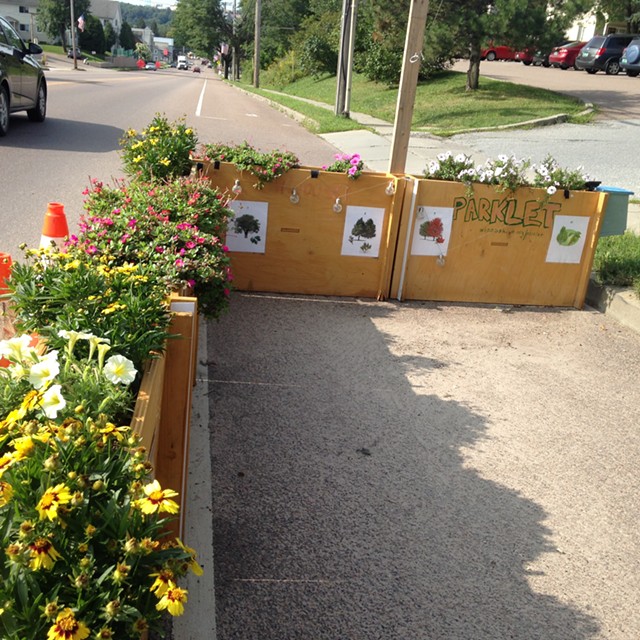 The city erected the parklet with a $3,000 Placemaking Demonstration Project grant from the American Association of Retired Persons (AARP). It's supposed to be in place until October, and it's generating mixed reviews.

"I don't like it," said Trang Tran, owner of Heavenly Nails & Spa at 325 Main Street, just across the street. "It takes a lot of room in the road."

She worries it will make the busy stretch more difficult for drivers, including her customers, to navigate.

"It looks like a bus stop to to me," said Jen Murray as she had her nails done at Heavenly Nails & Spa.

But the demo has fans as well.

"I think it's a good idea. This is something to make it a bit more pedestrian-friendly," said Abby Gaughan, another customer at the nail shop. "I think if it became more permanent, that would be a good thing."

Meanwhile, in Burlington, the city is using planted flowers to slow traffic along certain spots downtown, such as at Main and South Champlain streets, and on the bike route known as the Old North End Greenway, which heads from Battery Park toward the University of Vermont campus.

Bollards have been installed to reclaim parts of intersections and streets from vehicles. They're temporary fixtures, according to Nicole Losch, senior transportation planner for the Department of Public Works.

These "quick builds" will be in place for a few years or until the city replaces them with permanent curbs and green areas, Losch said. For now, the department is seeking feedback from residents, bikers and drivers. So far, they have mostly gotten questions, according to Losch.

The design is common, "but it's super new in Burlington," she said. 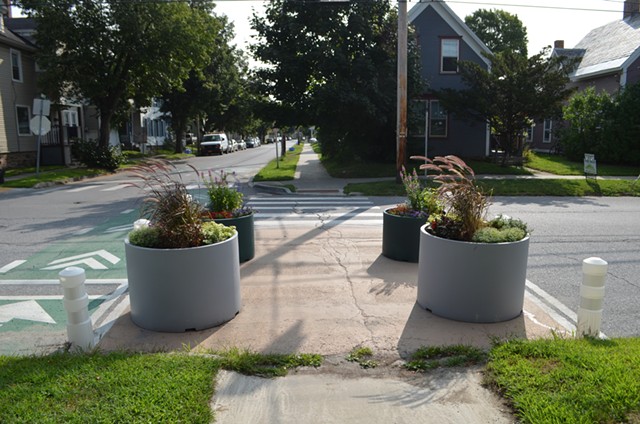