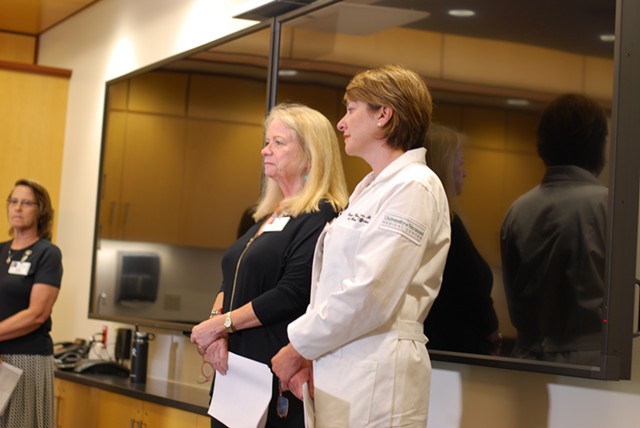 The University of Vermont Medical Center has given its administrators hefty raises and bonuses, according to its most recent tax filing. That's a "bitter pill to swallow" for the nurses fighting for higher wages and additional staffing, said union vice president Deb Snell.

The medical center on Wednesday released its fiscal year 2017 Internal Revenue Service Form 990 just hours after administrators and nurses left the bargaining table the night before without coming to an agreement.

The documents show that Eileen Whalen, president and chief operating officer, made more than $1,050,000 in salary and benefits during fiscal year 2017, about 20 percent higher than the $866,000 she earned the previous year.

Whalen's "20 percent salary increase feels a like slap in the face," Snell said. The nurses are asking for a 23 percent wage increase over three years, and a $15-an-hour minimum wage for support staff.

CEO John Brumsted made $2.1 million in salary and benefits, a 4.6 percent increase over the previous year, according to the hospital. Even before the raise, Brumsted made the most of any nonprofit leader in the state, Seven Days reported in July.

The medical center sent out a press release along with the documents. Brumsted’s “base salary, set by the UVM Health Network Board of Trustees, is $1,024,108, approximately the midpoint of salaries for health care executives with similar responsibilities, and a 4.6% increase over the previous year," the release read.

“Our approach is to compensate employees at all levels of the organization fairly, using benchmarks and market analysis to hire and retain the best people possible,” said Scottie Emery-Ginn, chair of the UVM Health Network Board of Trustees.

The news may increase tension between the two sides, who have been at odds over wages for months.

The nurses went on a 48-hour strike in July. They have since been working without a contract in spite of multiple bargaining sessions with hospital administrators.

The two sides got closer than ever earlier this week, according to UVM Medical Center spokesperson Michael Carrese. "There was an exchange of substantive ideas to close the wage gap," he said. "There's a sense of encouragement that we got closer than we have up to this point."

The two sides haven't set a date to continue negotiating. In the meantime, the nurses are finding ways to push back against the hospital and make their voices heard.

AFT Vermont, the parent union of the Vermont Federation of Nurses and Health Professionals, announced last week that it would divest its funds from the New England Federal Credit Union because the credit union’s CEO also serves on the hospital board.

The nurses have also urged the Green Mountain Care Board, which provides statewide oversight of hospitals, not to approve the UVM Medical Center's fiscal year 2019 budget until a contract is reached.

Nurses are planning to attend a public hearing held by the care board on August 22. Administrators from the UVM Health Network are scheduled to testify.

Snell said she plans to urge the Green Mountain Care board to ask "tough questions" of Brumsted regarding administrators' salaries and nurse staffing levels. "There's got to be a line in the sand about priorities," she said.