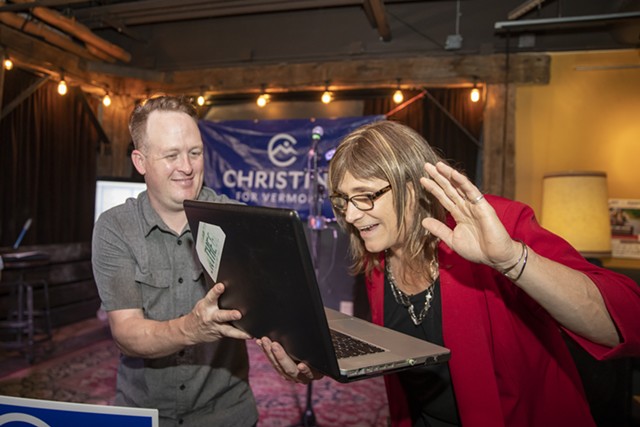 Christine Hallquist became the first openly transgender major-party nominee for governor in the country when she won Vermont's Democratic primary election on Tuesday. With nearly every district in the state reporting results, she had earned about 40 percent of the vote.

In November's general election, the former CEO of the Vermont Electric Coop will face Republican Gov. Phil Scott, who on Tuesday bested challenger Keith Stern. Scott's win, with about 65 percent of the vote to Stern's 32 percent, put to rest speculation that he’d suffer a significant backlash at the polls for signing gun control reforms into law last April.

An ecstatic crowd inside the Skinny Pancake in Burlington cheered and hooted as Hallquist announced that the campaign had made history.

"I must say I'm incredibly honored," Hallquist said, after taking the stage to thank supporters.

Hallquist suggested her primary win was part of a national "blue wave."

"This is a reaction to 2016," she said, referring to President Donald Trump's victory. "You know, our children's children will look back at 2016 and say, 'Wasn't our democracy awesome? We survived a despot.'"

Hallquist vowed to support public education and economic programs that improve living conditions for all, especially people on the lower end of the economic spectrum, and to support green initiatives.

"We want to unseat Phil Scott and we want to get the message out to Vermonters that Phil Scott is not doing us any favors in these areas that we all support," she said.

That message resonated all over Vermont during the campaign, she said: "It's the right message and it's the just message."

Hallquist admitted that being transgender brought an added layer of scrutiny and backlash during the campaign. She’d received "nonsense" via social media, but said, "I will not cower under any threat." Hallquist noted that she’d also received positive notes every day that brought her tears. 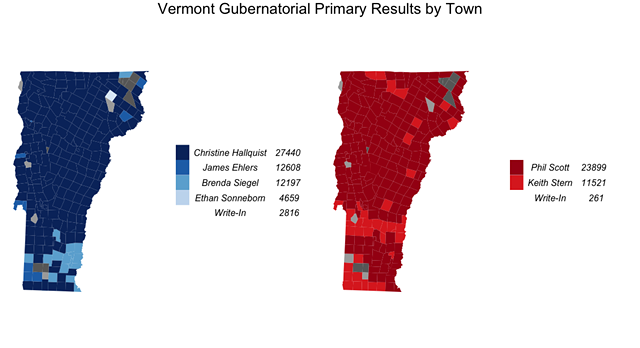 By nominating her, Vermont is showing leadership to the rest of the nation, she said. The campaign is going to win in November, Hallquist said: "Because nothing is impossible when you are on the side of justice."

Stern, a political newcomer from North Springfield, ran to the right of Scott, with support from gun rights activists who were angry at the governor for reversing course on gun control. Scott, who had previously opposed such measures, signed into law landmark legislation that banned bump stocks, limited gun magazine capacity, expanded background checks and raised the purchasing age to 21.

Scott confessed to being surprised by his comfortable margin of victory. "I actually thought the results were going to be a lot closer than they were, to be quite honest with you," he told reporters from the Comfort Inn & Suites at Maplewood in Berlin around 10 p.m. 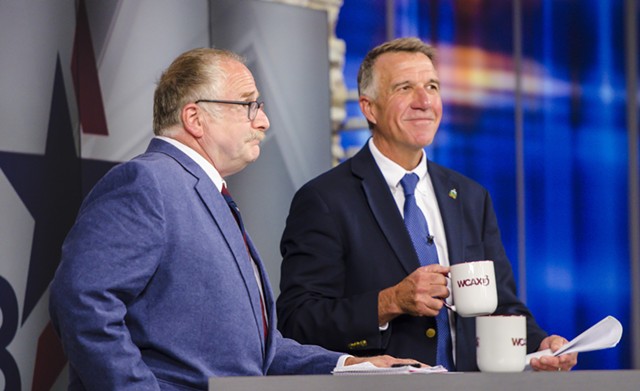 During brief remarks, the governor said, "I wanna thank those Republicans who have stuck with me through thick and thin and all those who have put aside partisanship to engage in the primary" — a nod, perhaps, to Democrats who may have taken Republican ballots in order to support the governor.

Pledging to run a "positive, issues-based campaign over the next three months," Scott called for unity among Vermont Republicans: "I know there are some who are still upset with me, who may not welcome tonight’s results, but there is so much more that unites us than sets us apart. No one agrees with their friends all the time."

Ehlers, the first Democratic candidate to declare his intention to run, told reporters Tuesday at his campaign party in Winooski that he might stay in the race as an independent. He said he hadn't decided whether he can endorse Hallquist and "retain my integrity."

The deadline to file as an independent candidate was August 9, though Ehlers could mount a write-in campaign during November's general election.

Ehlers said his son, Edward, had taken the loss hard.

"It’s a good lesson for him, especially at the age of 8, that it’s about the process, it’s about integrity and honor and living out your values and not compromising your principles," Ehlers said.

As for what's next? "For me, what I’ve been doing my whole life is fighting on behalf of others," he said. "I’ll always have something to do. It’s about all the people for whom tomorrow is going to be as challenging as it was today."

In a phone interview after the race had been called, Siegel said she was "really grateful for the people in Vermont for bringing my voice into the fold."

"I’m really excited to have changed the conversation around poverty and opiates," said Siegel, who spoke frequently on the campaign trail about being a low-income single mother and put forward an ambitious plan to address opioid addiction.

She wasn’t ready to endorse Hallquist, whom she considers a friend. "I’m gonna have a conversation [with her] before I answer any questions about that," Siegel said.

A write-in campaign for governor on the Democratic ballot by state Sen. John Rodgers (D-Essex/Orleans) appeared to have fallen flat. With most of the state's districts reporting, only about 3,600 voters had written in a name on their ballots, and not all were for Rodgers. That total was good for last in the primary — about 900 votes behind Sonneborn.

In other races around the state: 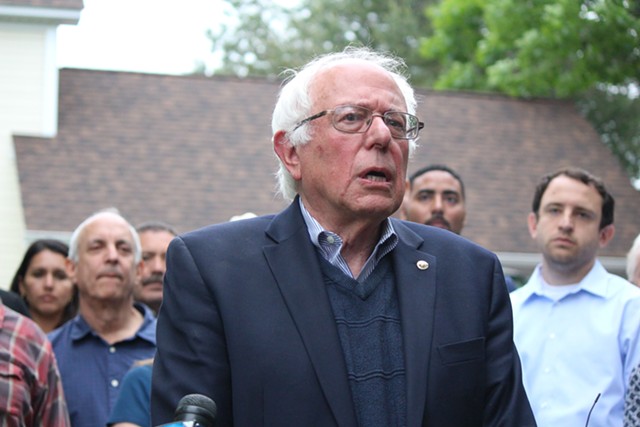 Sen. Bernie Sanders (I-Vt.) easily won the Democratic nomination for U.S. Senate with about 92 percent of the vote in Tuesday's primary election.

Sanders, first elected to the Senate in 2006, defeated Folasade Adeluola, who recently moved to the state; she earned about 5 percent of the vote.

Sanders' campaign staff has said the senator plans to turn down the nomination — as he did in 2012 and 2006 — and run as an independent.

After voting in Burlington Tuesday morning, Sanders left for New York, where he was scheduled to appear on "The Late Show with Stephen Colbert."

It was still unclear which of four Republican candidates will challenge Sanders in November's general election. Manchester realtor Lawrence Zupan and perennial candidate H. Brooke Paige were running a close race. With three districts in the state yet to report, Paige led by about 400 votes.

Vermont - thanks so much for the strong support you’ve given me tonight. https://t.co/lwNonFPDj9

In the state's other federal race, U.S. Rep. Peter Welch (D-Vt.), first elected in 2006, is one step closer to a seventh term after winning the Democratic primary for Vermont’s only House seat.

With about 81 percent of the vote, Welch easily beat Dan Freilich, a doctor at the VA Medical Center in White River Junction, who took in about 11 percent of the vote. Freilich criticized the congressman throughout the campaign for taking donations from special interest groups.

Elsewhere in Vermont, Emilie Kornheiser upset incumbent Rep. Valerie Stuart in the Democratic primary for the Windham 2-1 House seat, a district that includes Brattleboro. Stuart has served in the House since 2011. Kornheiser, who works for Windham County as the director of workforce development for youth services, won a resounding 72 percent of the vote.

Incumbent state Sen. David Soucy (R-Rutland), appointed by Scott in 2017, lost his seat and is poised to finish last among five Republicans in the race for three Rutland County senate seats. With all but one town reporting, Sen. Brian Collamore was the top vote-getter, while James McNeil appeared to have secured another spot. Edward Larson and Terry Williams were separated by just 50 votes for the final seat. Sen. Peg Flory announced she would step down last spring. Democrats didn’t field any candidates in their primary.

With all but three towns reporting results in Chittenden County, the six Democratic state Senate incumbents — Debbie Ingram, Ginny Lyons, Michael Sirotkin, Tim Ashe, Phil Baruth and Chris Pearson — appear to have fended off Valerie Carzello, Steve May and Finnian Boardman Alley. The group of six, who are running as a slate, will go up against Republicans Alex Farrell and Dana Maxfield in the November general election.

Correction, August 15, 2018: A previous version of this story failed to identify the Republican candidates for Washington County state Senate.
Prev
Next