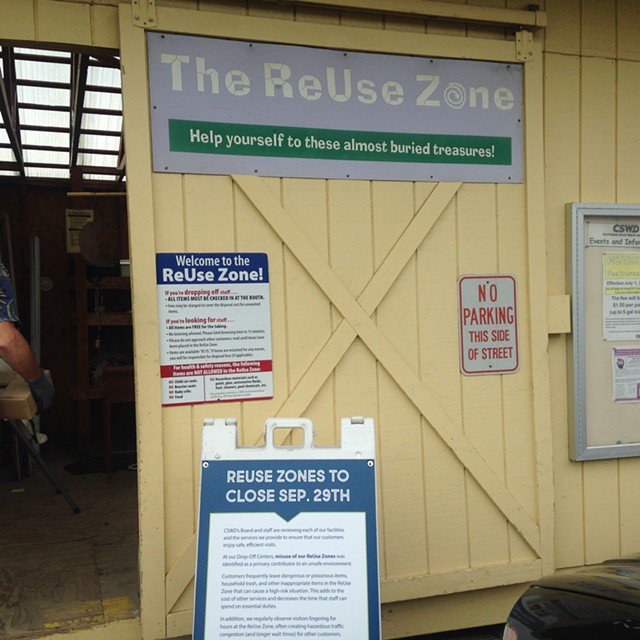 One man brought in a green plastic sandbox shaped like a turtle. Another went home with a cast-iron frying pan. It was business as usual at the ReUse zone in South Burlington Tuesday, but it won't be for much longer.

All-day scavengers and problems with prohibited items ranging from ammunition to prescription drugs prompted the Chittenden Solid Waste District to announce it will close the ReUse zones at the county's six drop-off centers, effective September 29.

The news, announced this month, isn't going over well among some regulars.

"Obscene, obscene, obscene," said Allen Scanlon of St. Albans about the decision as he rummaged Tuesday for finds in the small ReUse Zone shed at the South Burlington drop-off center.

"It's not right. The elimination of this facility is an affront," agreed Ron Dickens, also of St. Albans. "It is way too useful to the general public, let alone the financially stressed public."

Many of the people who visited the shed early Tuesday afternoon had been unaware of the pending closure.

"That's a shame," said Betty Hamel of South Burlington. She had picked out a frame and two plant saucers from the zone, and said that while she doesn't need to "shop" there, she supports the concept. It helps people and reduces waste, she said.

For 20 years, the free drop-off areas have been a popular feature at the regional solid waste authority's six transfer stations, where people otherwise pay to discard trash that goes to the landfill.

The idea behind them is to keep tools, books, sporting goods, appliances and other items with a useful life out of the landfill. People can unload items for free and others can take them for free. A sign at the South Burlington zone urged: "Help yourself to these almost buried treasures!"

The zones are marked and have their own corner, shed or bay at the different transfer stations in Burlington, Essex, Milton, Richmond, South Burlington and Williston. They can attract hundreds of people who drive in on busy Saturdays to drop off trash, recycling or compost, making it difficult to monitor what goes in the reuse zones.

Sometimes scofflaws who want to avoid disposal fees drop goods that are not allowed, and the waste district picks up the tab. Another problem: Scavengers sometimes stay all day at the ReUse zones or roam into areas where they shouldn't be, according to waste district staff.

In response to the problems, the board voted in June to discontinue the service.

Petitions and complaints aren't likely to change the decision, according to Finity. The waste district will encourage people to check out a list of alternative options including Goodwill Industries, ReSOURCE, the Habitat for Humanity ReStore or Freecycle.
Prev
Next