Walters: Sanders' Campaign Has $7.6 Million in Cash | Off Message 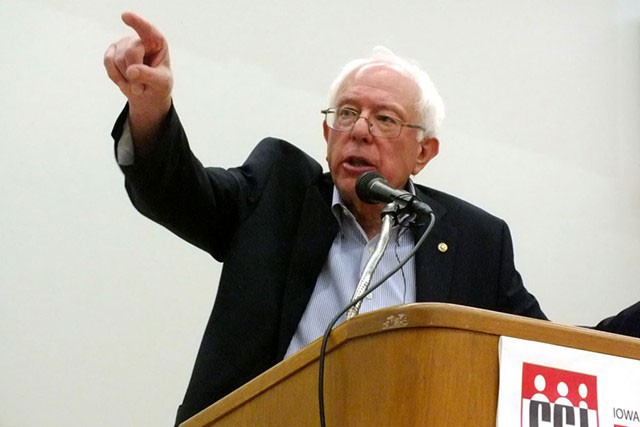 Sen. Bernie Sanders (I-Vt.) may only face a field of long-shot challengers in his bid for reelection, but he continues to raise money as if his political future depended on it.

In his latest Federal Election Commission filing, which covers April through June, Sanders' senatorial campaign fund, "Friends of Bernie Sanders," reported $1.43 million in donations and $749,000 in expenditures, lifting its cash-on-hand total to $7.58 million.

The donations came entirely from individuals; he took no money from corporations or political action committees. Most of the expenditures were for Sanders' extensive travel and public appearances, and for staffing. His campaign has five paid staffers, including longtime Sanders ally Jeff Weaver, whose twice-monthly salary is just under $8,000 — an annualized rate of roughly $190,000.

Sanders will have little reason to draw on his overstuffed war chest. He remains extremely popular, and his declared challengers have little or no political experience. The Democratic primary includes Folasade Adeluola, an Indiana woman who claims a Shelburne motel as her Vermont residence, and Jon Svitavsky, an advocate for the homeless. The Republican side has four long-shot hopefuls: Burlington attorney Jasdeep Pannu; Manchester realtor Lawrence Zupan; Washington resident H. Brooke Paige; and perpetual presidential candidate Rocky de la Fuente, a resident of California. Independent candidate Brad Peacock, a Shaftsbury farm worker, rounds out the field.

U.S. Rep. Peter Welch (D-Vt.) also carries a healthy bankroll into what's almost certain to be an easy November victory. He raised $130,000 in the three-month reporting period, including $70,000 from individuals and $60,000 from political action committees. The percentage of individual gifts is substantially higher than usual for Welch; he normally raises the lion's share of his money from PACs.

Like Sanders, Welch faces no established political figures in his bid for a seventh term in Congress. Declared candidates include Democrats Dan Freilich and Ben Mitchell, and Republicans Anya Tynio and Paige, a perpetual candidate running for multiple offices.

Sen. Patrick Leahy (D-Vt.) doesn't face the prospect of reelection until 2022, when he will be 82 years old; his campaign wasn't terribly active and retains a healthy bottom line. The Leahy campaign collected $19,000 in donations, roughly half from individuals and half from PACs. Expenditures totaled $66,000, which — in the exclusive neighborhood of big-money politics — is essentially the cost of keeping the doors open and the lights on. Leahy paid more than $11,000 for staffing, $15,000 to a fundraising firm and $13,000 to Trilogy Interactive, a political strategy consultant.

Leahy's spending may have vastly exceeded his intake, but weep not for our senior senator. His campaign fund still has $1.68 million in cash on hand.

Welch and Leahy also operate their own political action committees, known as "leadership PACs," which can raise additional money from those who have contributed the maximum amount to the candidates' reelection accounts. Their latest finance reports show relatively modest activity.

Welch's Maple PAC received three donations in the reporting period totaling $12,500. All were from other PACs: $5,000 each from the Honeywell International and National Association of Convenience Stores PACs, and $2,500 from the Food Marketing Institute PAC. Maple PAC spent $7,300, mostly in donations to Democratic congressional candidates. It ended the period with $60,000 in cash on hand.

Correction, July 17, 2018: A previous version of this article did not identify H. Brooke Paige as a candidate for U.S. Senate.
Prev
Next