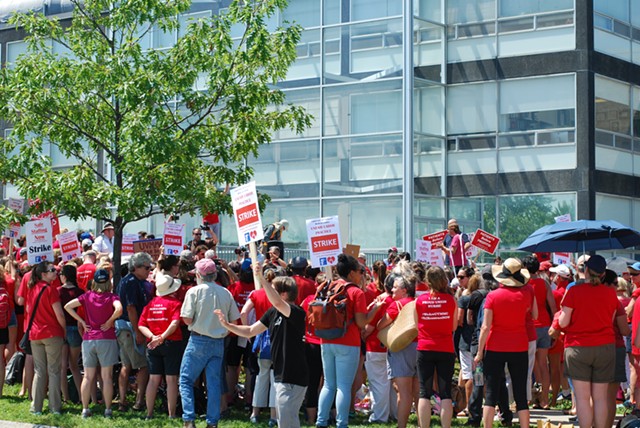 Nurses will start work as usual Saturday morning at the University of Vermont Medical center after a 48-hour strike. But their union has said another strike is not off the table as it remains at odds with the hospital over a three-year contract.

Members of the 1,800-member union walked off the job Thursday complaining that low wages have led to staffing problems. The union is seeking roughly a 23 percent wage increase for registered nurses over three years.

Meanwhile, the two-day strike cost the hospital about $3 million, according to Whalen. Much of that went to paying for nurses from out of town to cover for the strikers.

Emotions have run high during rallies and picketing. Many nurses waved homemade signs mocking hospital administrators and comparing them to members of President Donald Trump’s administration. Hundreds of nurses chanted and cheered next to hospital entrances as passing drivers honked their horns in support.

Soon, they'll be back at work.

“There’s that level of mistrust that we’ve talked about having built over the last several weeks between management and us,” said Tristin Adie, a nurse practitioner and member of the union bargaining team. “I think it's something that’s going to hang over us as we go back in.”

Adie said union members who participated in the strike are disappointed in colleagues who did not. The hospital reported that 74 of its nurses showed up to work Thursday, and 93 did on Friday.

Some nurses told union leaders they felt they could not lose two days of wages, or did not want to leave their patients, according to Adie. She said nurses who picketed sacrificed wages because they felt it was the only way to achieve a settlement that will create better long-term conditions.

“We feel as a group that we’ve sent a very strong message that we’re standing up for better care for our patients and better working conditions for all of us. And to not have our colleagues join us in that effort is disappointing,” she said. “So it will be a little difficult working side by side with those folks, but we’re professionals and we’ll do what we have to do to take care of our patients.”

Whalen said Friday that the hospital must work proactively to bring people back together after the strike. She said steps will be taken to promote healing as an organization and to start conversations between different members of the hospital’s team.

Still, another strike is possible. Prior to striking, the union must take a full-member vote. Its bargaining committee would have to give the hospital 10 days notice.

Adie said some union members hope to hold a strike vote immediately, while energy is high. Members of the bargaining team chose to limit the strike to two days because the union had never held a strike before, she said. Health care workers often hold short strikes out of concern for patients, she explained. Moving forward, the union could vote for a longer strike.

Adie said she hopes the community support evident during the strike will convince the hospital to “make some movement” at the bargaining table. New bargaining sessions have yet to be scheduled.

Whalen said the hospital was not preparing for another strike at this time.

“What we are really focusing on is welcoming our nurses back into the organization and getting back to the table,” she said.
Prev
Next