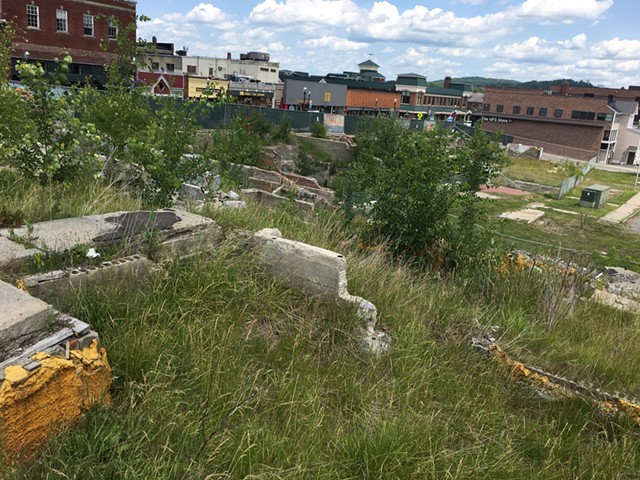 Gov. Phil Scott and Vermont Attorney General T.J. Donovan announced on Thursday the settlement of civil lawsuits against Ariel Quiros and Bill Stenger, the two key figures in the EB-5 scandal. The deal will net at least $2.1 million for economic development efforts in the city of Newport and the Northeast Kingdom, the places most impacted by the failure of Quiros' and Stenger's real estate ventures.

Scott, Donovan and numerous other officials announced the settlements at a press conference on Newport's City Dock, on the shore of Lake Memphremagog. "This is a major step forward as we continue to recover from the effects of the EB-5 developments," said Scott. "The dark cloud that's been hanging over us is beginning to lift."

The settlements will clear the way for an independent investigation of the role played by officials in the administration of Peter Shumlin, who was governor when Stenger and Quiros' abuses of the EB-5 program took place. Auditor Doug Hoffer will lead the probe; he gave no timeline for its completion, noting that his staff will be sorting through more than a million pages of documents.

The closing of the civil cases should also allow Newport to explore opportunities to develop "The Hole," an entire downtown block that was razed to make room for one of the Quiros/Stenger projects, and which has remained a blight on the city's streetscape. "We are now moving forward with the development of Main Street," said Newport Mayor Paul Monette. "We can start over and create our own destiny."

Stenger will pay $100,000 to the state over four years; the money will be devoted to development efforts in Newport. Quiros is handing over five properties to the state, which will eventually sell the parcels for an expected return of $2 million. The proceeds will be used to boost economic development in the Kingdom.

In addition, said Donovan, "Mr. Quiros will no longer be allowed to do business in Vermont."

The settlements do not mean the state will be able to release reams of withheld documents to the public. Donovan said that that remains impossible due to a lawsuit filed against the state by Vermont attorney Russell Barr on behalf of some EB-5 investors. "We won the case in Lamoille County court," Donovan noted, "but Russell Barr has appealed" to the state Supreme Court. "Until that is resolved, it will hold up public dissemination of documents."

Related EB-Fail: Jay Peak Is Part of a Troubling Pattern

EB-Fail: Jay Peak Is Part of a Troubling Pattern
By John Walters
Fair Game
Hoffer will have access to the documents for his investigation but will not have the authority to release any of them.

Hoffer noted that some documents may be off-limits to him because of executive and attorney-client privilege. Any executive privilege claims would come from Shumlin. "I may ask him to waive executive privilege," said Hoffer. "He's a central figure in the case. But it's too soon to tell."

The settlements came on the heels of the U.S. Citizenship and Immigration Services' July 3 order that Vermont's EB-5 program be terminated immediately due to "misrepresentations" made by the state to investors. The report asserted that the Vermont EB-5 “Regional Center failed to conduct adequate monitoring and oversight.”

Donovan said there was no connection between the USCIS report and the settlements announced Thursday. "We've been negotiating for some time," he said.

When asked if the state could still pursue criminal charges against Quiros or Stenger, Donovan said the decision to take the civil route had been made by his predecessor, Bill Sorrell, and that his profession's ethical standards do not permit the filing of criminal charges after civil remedies have been pursued.

When asked if he would have pursued a criminal case if he'd been attorney general at the time, Donovan said "I might have, but the decision was made."

Stenger and Quiros are still targets of a federal investigation that could result in criminal charges.
Prev
Next