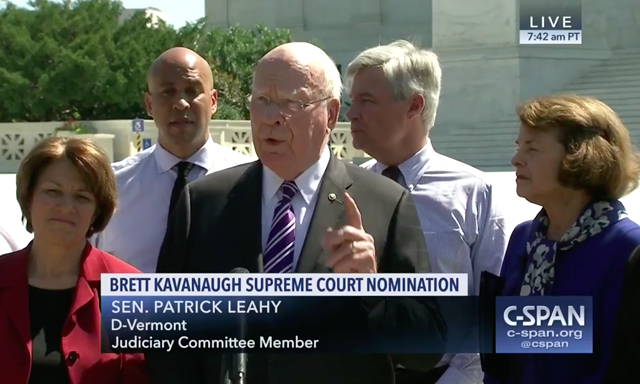 The U.S. Senate has vetted 19 Supreme Court nominees since Sen. Patrick Leahy (D-Vt.) took office in 1975, but Vermont's senior senator said the stakes have never been higher than they are over President Donald Trump's nomination of Brett Kavanaugh.

“I’ve never seen a president act as though the Supreme Court has to be a wing of the White House instead of an independent branch of government," Leahy said in an interview Tuesday. "And they made it very clear that the president expects it to be.”

Leahy is the longest serving member of the Senate Judiciary Committee, which is expected to hold confirmation hearings on the nomination. The full Senate must approve Kavanaugh's nomination before he can replace Justice Anthony Kennedy, who announced his retirement at the end of June.

As special counsel Robert Mueller investigates whether Trump and his campaign were involved with Russian meddling in the 2016 election, Leahy said the independence of federal courts is as important as ever.

“We’ve got the Russia investigation, which is a significant one, and here we’ve got [a nominee] who said that the president should be above the law when they’re president,” Leahy said.

Leahy was referring to Kavanaugh’s assertion, in a 2009 article in the Minnesota Law Review, that sitting presidents should not be subject to indictments, civil lawsuits or criminal investigations.

Leahy disagrees, and he said Kavanaugh’s philosophy — and its obvious appeal to a president who is currently under investigation — is a threat to the basic structure of American democracy.

“I’ve been here with every president since Gerry Ford. This is the first president who talks as though he does not believe in the independence of the judiciary,” Leahy said. “It’s more than frightening. It destroys the basis of checks and balances in our government.”

Leahy and other Democrats held a press conference Tuesday morning on the steps of the Supreme Court to decry Trump's choice. Senate Democrats don't have a majority, however, and they are powerless to block the nomination unless some Senate Republicans join them.

Still, Leahy doesn't talk as though Senate confirmation is a done deal. Vermont's senior senator wants to see what the Judiciary Committee's vetting process turns up.

“I think we should have the hearings; let’s lay out the facts. For one thing, [Kavanaugh]’s got thousands of pages of memos and emails and all from his time at the White House," Leahy said. "Let’s see what’s in there.”
Prev
Next