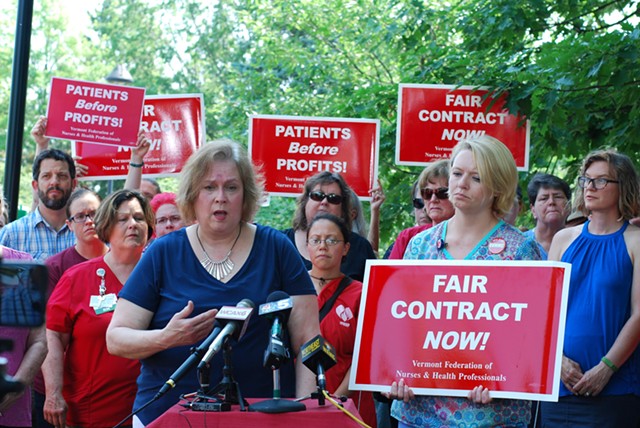 The University of Vermont Medical Center nurses have served the hospital a 10-day notice for a strike on July 12 and 13, the union announced at a press conference outside the hospital on Monday.

Members of the union’s bargaining team voted unanimously on Saturday morning to serve the notice. As word got around, the hospital scheduled another bargaining session on Sunday, but the two sides were unable to find common ground. The nurses' three-year contract expires on July 9.

Earlier in June, members of the nurses' union voted overwhelmingly to authorize their bargaining team to serve a strike notice. If those nurses leave work, it could mean trouble for Vermont's only trauma center with a Level 1 designation, meaning it provides the most comprehensive care. The hospital's administration maintains it will keep the place running smoothly in the event of a strike, but the nurses express skepticism.

"They are delusional if they think they can go on, business as usual, without us,” said Julie MacMillan, a registered nurse and the union's lead negotiator.

Her voice cracked as she told reporters after a press conference that providing high-quality patient care was impossible without safe staffing. The nurses have maintained that their pay is too low to attract and retain adequate staff. MacMillan said millennials with student debt and no ties to Vermont will not move to the state to raise families if they are not offered a competitive wage.

The hospital administration released a document on Monday outlining its latest offers. MacMillan said the union is pleased that the hospital offered nurse practitioners a 12.6 percent to 25.5 percent increase in salaries over the next three years. She said the union also appreciates the hospital’s willingness to provide parity in salaries for registered nurses with different roles.

But a proposed 7.3 percent to 14.5 percent increase in wages for inpatient nurses — the bulk of the union’s membership — is not going to fly, she said. MacMillan said this proposal includes the 2 percent "step increases" nurses receive annually, which the hospital confirmed. Nurses at the top of their pay scale would not receive those incremental increases, explained MacMillan.

Some numbers provided by the hospital and the union do not match. Union members have called for parity between their salaries and those of nurses at Champlain Valley Physicians Hospital in Plattsburgh. A document released by the nurses states that starting salaries in Plattsburgh would be $2 an hour higher than their counterparts in Burlington next year. Hospital spokesman Michael Carrese said UVM Medical Center nurses are paid about $1 an hour less than CVPH nurses, but earn more in a shorter time period as they move up the ladder.

Is the union worried about harm to patients during the strike? MacMillan said the nurses are not taking the strike lightly, but that she can say with “100 percent confidence” that whatever happens now is on the hospital, since its administrators can stop the strike.

MacMillan called the UVMC higher-ups “the biggest bullies in the state right now.” The union filed a complaint with the Department of Labor earlier in June alleging labor violations from hospital managers, such as taking down union fliers and preventing union leaders from talking to members during breaks in the hospital. Carrese said the hospital takes employee rights seriously and disputes the charges.

Nurses have continued to gather public support despite their strike notice.

State Rep. Johannah "Joey" Donovan (D-Burlington), Sen. Philip Baruth (D/P- Chittenden) and a representative for Sen. Bernie Sanders (I-Vt.) spoke at the press conference in support of the nurses. Donovan said 43 members of the Vermont legislature have signed a letter to hospital CEO Dr. John Brumsted expressing concern about the possibility of a strike, and had yet to get a response.

Donovan’s daughter, also named Johannah Donovan, is a nurse at the hospital.

Baruth said his mother spent five months in the hospital's ICU before she passed away on Memorial Day. He thanked the nurses for her “exceedingly” good care and for helping preserve her dignity at the end of her life.