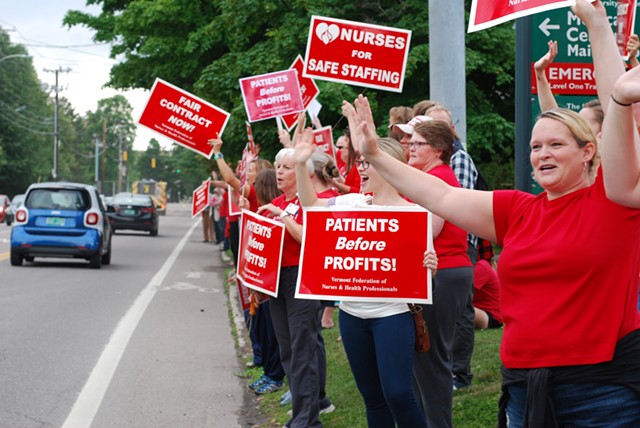 With 10 days left until its contract expires, the bargaining committee for the nurse's union at the University of Vermont Medical Center was preparing for a late night of negotiations Friday. The union had yet to serve the hospital a strike notice.

On June 13, the union announced that 1,227 of its 1,800 members voted to give the union's bargaining team the authority to issue a notice to the hospital of a potential two-day strike if a new contract isn't agreed to before the current one expires July 9. The nurses are required by law to give the hospital 10 days' notice before walking off the job.

If the nurses were to strike, it could mean a labor shortage at the only level one trauma center in the region. Nurses have asserted that they are the backbone of the hospital, while UVM Medical Center officials have repeatedly said it's prepared to continue providing quality care to patients in the event of a strike. The hospital has made arrangements with an outside firm that would provide temporary workers.

When the strike votes were first tallied, union leaders suggested they would serve a strike notice Friday if their demands had not been met. But for now, they plan to continue negotiating in good faith.

“We have a lot of options. We can continue to keep bargaining if both sides are agreeable, if there is something worth staying at the table for," said Deb Snell, executive vice president of the union, on Friday. “If tonight they really don’t come back with anything ... the bargaining team does have the ability to issue the strike notice at any time.”

The threat of a strike is part of an unusually tough negotiation cycle. Nurses say they are underpaid and overworked and that they have had enough. They have written op-eds, covered the Burlington area in yard signs and protested publicly.

About 200 nurses held a honk-and-wave rally across the street from the hospital Thursday afternoon as their negotiating team met with hospital officials. Nurses cheered and waved union signs as passing drivers sounded their horns. Chief among the union’s grievances is its claim that the hospital is short staffed, leading to extra work for nurses and worse care for patients. The hospital’s low salaries contribute to an inability to keep nurses on permanent staff, according to the union.

Colleen Myles said at the rally that it is “crazy” that she has a bachelor’s degree and is still living paycheck to paycheck. Kayla Panko, a registered nurse on the mother-baby unit, said she struggles to provide mothers the education they need about breastfeeding and more because she has too many patients.

Johannah Donovan, a registered nurse in an acute care specialty unit, said Friday that this is the most contentious contract negotiation she has witnessed in her 12 years working at UVM. She feels that the hospital has become more invested in expansion and less invested in patient care over time. She described the hospital as “chaotic.”

“There are not enough nurses. We can’t be getting stretched so thin that people are getting lost in the chaos. It's patients that pay the price,” said Donovan. “I don’t want any of my patients falling through the cracks, and for that to happen, that means I don’t take breaks and I stay late every shift.”

Donovan works three 12-hour shifts each week, but said she gets several calls from the hospital on all of her off days asking her to come in and cover more shifts.

The fact sheet also says that the average base pay for a full time nurse is about $72,000, not including overtime or benefits. In an interview with Seven Days on May 31, hospital president and chief operating officer Eileen Whalen put the average base pay for nurses at $64,000. Weeks later, hospital spokesman Michael Carrese called back to say the figure was really $72,000 and that staff had “screwed up” because of a spreadsheet error. 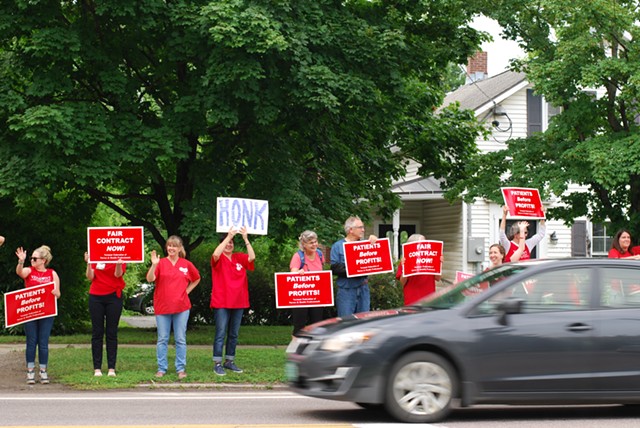 According to the Bureau of Labor Statistics, the average annual pay for registered nurses nationally in 2017 was $73,550.

Nurses refused to meet with a federal mediator for months, saying they would not agree to use one until an impasse was reached, but relented this week. Union vice president of organizing Jason Serota-Winston said the hospital has not yet met nurse's demands, but they are using the mediator in an attempt to try everything to get a fair contract.