Lakeview Mobile Home Park in Shelburne to Be Sold | Off Message

Lakeview Mobile Home Park in Shelburne to Be Sold 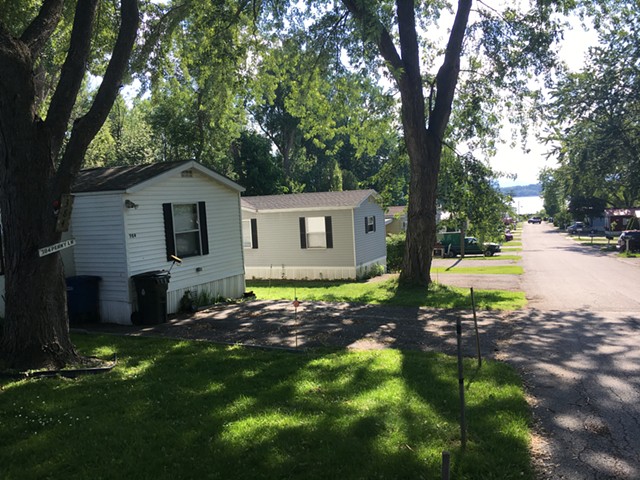 Residents of Lakeview Mobile Home Park in Shelburne got a letter Wednesday from park owner Trey Pecor informing them that the property will be sold. Now they must quickly decide if they want to buy the park and turn it into a co-op.

“We are all kind of reeling here,” said retiree Chris Pratt.  He had intended to live in the park until he dies, he wrote in an email to Seven Days.

Under Vermont law, mobile home residents have the right of first refusal if an owner decides to sell, and they are given 45 days to consider the purchase. Lakeview’s residents have a few extra days since the state has not yet received notice via certified mail, according to Arthur Hamlin, the state’s housing program coordinator for mobile home parks. If the occupants choose to make the purchase, they have an additional 120 days to appraise the land and negotiate with the owner.

The asking price for the 7.4-acre park, which has 64 units: $2.4 million. The  property is off busy Shelburne Road. Residents of the mobile homes keep their lawns trimmed, and they enjoy views of Lake Champlain and the Adirondacks.

Pratt’s dream of living out his golden years there is likely still safe, according to Hamlin. He explained that if the owners plan to close the park, they must specify that intent in their notification letter. Pecor’s letter states that the park will not close.

“My understanding from talking to the owners is that they want to sell [Lakeview] to stay operating as an affordable mobile home park,” said Hamlin.

Turning mobile parks into co-ops is not uncommon in Vermont, according to Hamlin. Residents of Farrington's Mobile Home Park in Burlington reached a deal to buy the place for $5 million in 2015 when it went up for sale.

In the coming weeks, Hamlin plans to invite Lakeview residents to meet with nonprofit organizers, including those in the Champlain Valley Office of Economic Opportunity, to make sure residents understand their rights and the resources available.

Pratt said residents have begun organizing to gauge whether a majority want to buy. If they do, residents will pay down a mortgage each month instead of paying rent. If the park becomes a co-op, residents will have to grapple with infrastructure problems, according to Pratt.

“If we buy the park from Pecor, then we own it," he said. "That means we are subject to all the infrastructure stuff that has not been dealt with or has been done in a half-assed way. I was building a deck, and when I put the shovel in the ground, I hit an old septic line.”

Hamlin said organizations such as the Vermont Cooperative Development Institute provide funds to help residents pay for inspections, and that the results can influence sales negotiations.

If residents decide not to purchase the park, Pecor would be allowed to sell to other buyers. However, if the asking price were lowered more than 5 percent of what residents were offered, they would get another 45 days to decide if they want to buy the park at the reduced price.