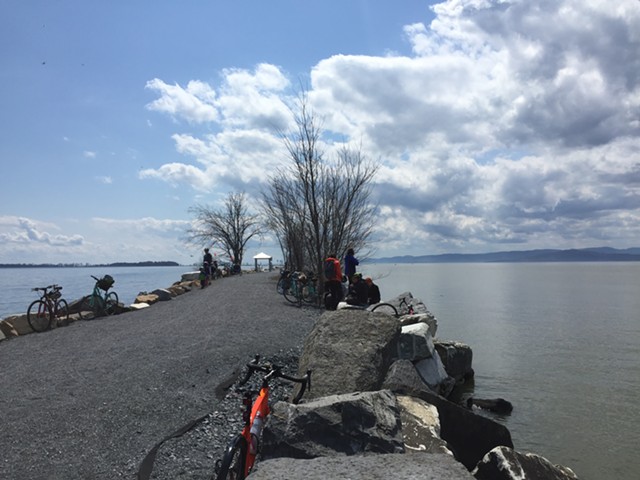 Bikers will be able to cross Lake Champlain from Colchester to the islands this Fourth of July weekend. The Island Line Trail is back open following a May storm that caused severe damage.

Gov. Phil Scott helped reopen the causeway at a press conference on Friday where he praised the "can-do attitude" of the workers who helped get the trail back up and running.

The bike ferry, which is operated by cycling organization Local Motion, will also start running, transporting bikers across the 200-foot cut to South Hero.
A May 4 storm pummeled the trail, eroding the 10-foot wide path to six inches in some places, according to a Friday press release from Scott's office. The storm also caused sinkholes and damaged a bridge on the causeway. Repairs were originally expected to cost $563,000 and take all summer to complete. Local Motion announced it wouldn't run its ferry this year.

Earlier this month, the state Agency of Transportation stepped up to pay for the work, with funding help from the Federal Highway Administration. The final cost for the project was $290,000.

On June 18, construction workers increased their work schedule, putting in 12 hours a day, six days a week to finish the job early, according to the release.

The bike ferry, which typically operates from May to October, transports 16,000 people each year.
Prev
Next