Walters: Scott, Legislature Still Talking Past Each Other | Off Message

Walters: Scott, Legislature Still Talking Past Each Other 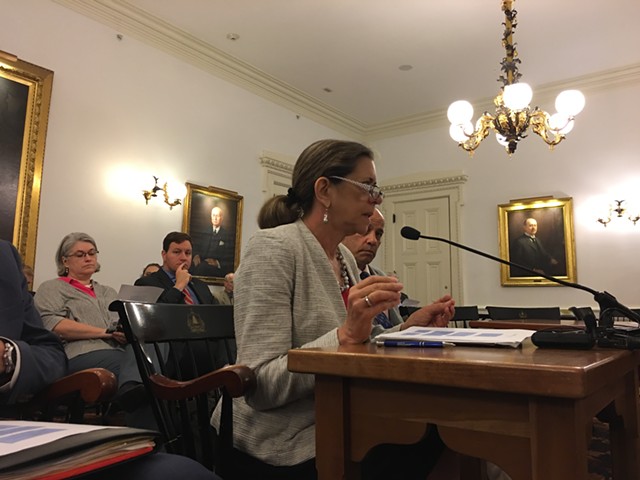 Three Vermont Senate committees met Wednesday morning to begin work on the legislature's third version of a budget bill, the first two having been vetoed by Gov. Phil Scott. By day's end, the three panels had approved a proposal that moves slightly in Scott's direction — but only slightly.

"I would not predict a veto," Administration Secretary Susanne Young said after the hearing. "But this new proposal is not substantially different from the last one."

The Appropriations, Finance and Education committees convened jointly due to severe time constraints. If there's no budget on July 1, state government would be forced to shut down. And so far, the Scott administration has refused to disclose contingency plans for that eventuality.

The administration's top fiscal officials came to the hearing with a new "proposal" consisting of a single-page flowchart. Its essence is this: The governor and legislature would split $33.2 million in unanticipated revenue. Lawmakers could use their half however they wish, and Scott would use his half to lower property tax rates.

Scott would still fully intend to keep property tax rates level, which would require another $14 million, according to his analysis. "The governor is willing to risk that the $14 million will be there" in additional surplus revenue, Young testified. If not, she said, the administration would find enough savings in general state spending to cover the difference by the end of the year.

Harsh Words: Dueling Rhetoric on the Budget Battle
By John Walters
Fair Game
Committee members were skeptical of the new administration plan, to the extent they addressed it at all. The plan fails to address their fundamental objections: The legislative majority opposes the use of onetime money to fund ongoing programs, it isn't willing to book speculative future savings, it doesn't want to use general fund revenue to lower property tax rates and it's concerned about creating a bigger education fund gap in the next fiscal year.

"This is the same proposal with a different set of contingencies?" queried Sen. Ginny Lyons (D-Chittenden).

Legislative fiscal analyst Mark Perrault testified that Scott's proposal would lead to a repeat of this year's standoff over property taxes. "Even if you're able to agree on onetime money, you're creating an issue for [fiscal year] 2020," he said.

Scott's plan, he said, would create a shortfall of $50 million to $55 million in the education fund. That would require a property tax rate increase of 7 to 8 cents — even without any increases in school spending at all.

"When I see a $55 million [gap], I ask why the governor is OK with creating a crisis next year," said Senate Education Committee chair Phil Baruth (D/P-Chittenden). "I can't see how anybody with good fiscal management could choose the governor's option."

The responsible course, agreed Senate Finance Committee chair Ann Cummings (D-Washington), would be to collect enough property tax revenue to pay for school budgets approved by voters on Town Meeting Day. But in the end, Cummings and her fellow Dem/Prog caucus members agreed to keep residential tax rates level and give Scott a one-cent reduction in nonresidential rates.

"I'll hold my nose and vote 'yes,'" Cummings said, "in the interest of compromise."

It's an ironic turn of events. Democratic lawmakers are preaching fiscal discipline, while the Republican administration is willing to "risk" future revenue increases and a fiscal cliff in the education fund next year.

The three committees voted to let their three chairs craft a detailed bill that will go before the full Senate on Thursday. Approval is all but certain; it would then go to the House. And face a likely gubernatorial veto.
Prev
Next