Recreational cannabis will be legalized July 1 in Vermont, but driving under the influence of drugs remains dangerous and illegal, Vermont State Police warned Tuesday during a wide-ranging discussion with the media about law enforcement changes surrounding the new law.

Cannabis-sniffing canines will be given new assignments and the agency has considered purchasing scales for patrol cars so troopers can weigh motorists' weed, according to Capt. James Whitcomb. Possession of more than one ounce of cannabis is illegal, according to Act 86, Vermont's new recreational marijuana law.

Tuesday's talk at state police headquarters in Waterbury came less than two weeks before weed legalization takes effect. And though the date is coming ever closer, Whitcomb said state police won't be more lenient in the intervening 11 days.

"There has been no easing of enforcement," Whitcomb said. "July 1 is a hard date."

Lt. John Flannigan joined Whitcomb as they took questions about a training bulletin issued last week to all Vermont state troopers. The bulletin includes definitions of relevant terms, a summary of the law and advice for traffic stops. The men cautioned that cannabis enforcement will vary case by case as troopers take cues from local state's attorneys.

The agency is prepared to update the bulletin as its policies are likely to adapt to case law, according to Whitcomb. He couldn't answer questions about hypotheticals, such as issues concerning public versus private property and landlord-tenant disputes.

“The bulletin, like the law, doesn’t address all potential incidents,” Whitcomb said.

From Old Dogs to Future Searches, Cops Learn Tricks of Marijuana Law
By Mark Davis
Crime
The department has ceased training canines to sniff out marijuana, Whitcomb said, and dogs that are already trained will focus on other aspects of paw patrolling. 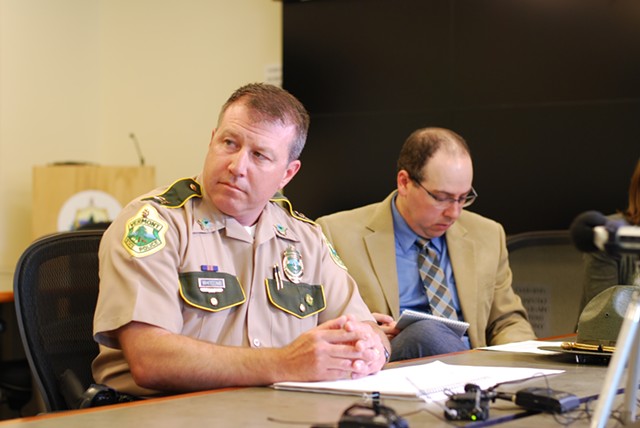 Road safety is a big department priority. Flannigan emphasized that driving while impaired poses a serious safety risk. He said the agency has spoken with departments in other states about strategies to prevent impaired driving. One possibility is a public service announcement with the tagline: "Drive high, get a DUI," according to Flannigan.

One challenge Vermont faces is that officers currently have no reliable roadside drug test for cannabis. That means drivers suspected of being impaired must be taken back to a police station or hospital to be evaluated by a drug recognition expert. A blood test, either with consent or a warrant, can be administered, although a positive test result alone is only one piece of evidence in an impairment case, according to Flannigan.

"Our priority is, we want to make sure that the person is capable of operating safely," he said.
Prev
Next