Gov. Phil Scott vetoed the latest iteration of the Vermont state budget on Thursday, sending legislators back to the drawing board as a July 1 government shutdown looms.

The governor's veto came as no surprise. He had warned legislators that he would oppose any tax increase. The bill, H.13, would have resulted in an automatic 5.5 cent property tax increase on nonresidential landowners. Earlier Thursday, both Scott and legislative leaders appeared to dig in at separate press conferences about the spending bill stalemate, which has lasted more than a month.

Scott had until midnight Thursday to sign or veto the legislation. He announced his decision around 8 p.m.

"One easy solution to resolve the budget debate would be to send me a new bill that prevents the automatic increase in the nonresidential rate," Scott said in a publicly released letter addressed to Vermont House Clerk William MaGill. "This would ensure we have a budget in place long before July 1 and require us to work together, on a level playing field, to resolve our remaining differences in the tax bill."

In the letter, the governor made clear that he considers it the legislature's job to rectify what he called "the one remaining area of disagreement." Scott pointed to the state's estimated surplus of $55 million as a source for funding school budgets and paying down debt in the state teachers' retirement fund — an effort legislators have made a point of emphasis in budget negotiations. 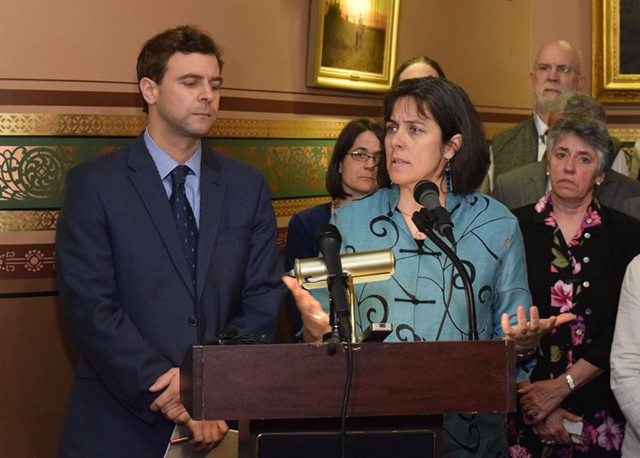 The legislative leaders pointed to four aspects of the vetoed budget that the governor supported, including a level residential education tax rate and approximately $30 million in income tax reductions intended to offset the effects of President Donald Trump's federal tax cut.

"The bill reflects movement by the legislature toward the governor, while the governor has not made a single concession," the statement read.

Ashe indicated earlier Thursday that the legislature could try to override the governor's veto — a tall task, especially in the House.

Read the full veto letter and the response from legislative leaders below: