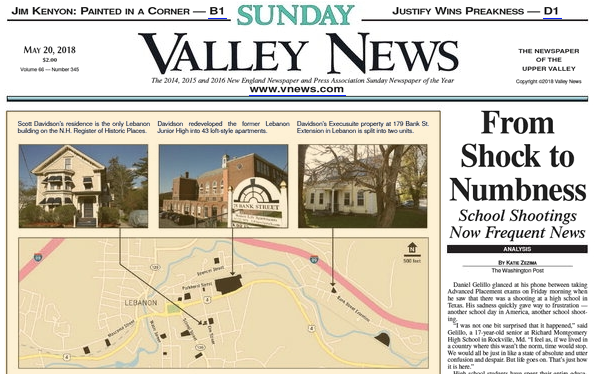 The Lebanon, N.H.-based Valley News will close its printing operation by the end of this year and is outsourcing its advertising design service next month.

Printing will be done at a new facility near Concord, N.H. that will serve three newspapers owned by Newspapers of New England — the News, the Concord Monitor and the Monadnock Ledger-Transcript. Publisher Dan McClory announced the changes in Wednesday's paper.

Three designers will lose their jobs in July, when the News will begin contracting with Gannett for design services. Twelve full-time and 18 part-time staffers in printing and distribution will have to choose whether to relocate to central New Hampshire or adapt to a commute that will take at least an hour each way. They'll have some time to decide; the new press won't be ready to go until December.

McClory said that all 30 of those workers will be offered jobs in the new printing facility. He mentioned ride-sharing as a possibility for those who want to work in the new location without moving.

McClory pointed to the positives for his parent company and its three New Hampshire papers. "It's a chance to enhance reproduction quality with new printing presses," he said. "We can also grow the commercial printing business," which he said is a "significant part" of the company's bottom line. The new presses will also allow the three newspapers to use more color on their pages.

Readers, he said, will see little change. News and editorial staff are not affected by the cuts. The physical pages will shrink a bit, to the same size as the New York Times and Boston Globe. The nightly deadline will be somewhat earlier and guaranteed delivery times will be a bit later.

The move will also force a decision for the News' printing clients, which include the Randolph Herald, the Vermont Standard and the Dartmouth daily. "We hope they'll move with us," said McClory.
Prev
Next