A fire at a housing complex in Burlington late Saturday morning and a fatal car crash about two hours later have shocked the local Somali and Somali Bantu communities.

The tragedies, both involving refugees from the African nation and occurring just blocks away from each other, took place less than a week before the Islamic holiday of Eid, which Muslims celebrate to mark the end of the fasting month of Ramadan.

Lul Ali Gure, 29, was killed in a car crash around 1 p.m. Saturday near the Burlington-South Burlington line. She was the passenger in a car driven by Sadio M. Ali, also 29.

The two women were driving eastbound on Home Avenue and hit a vehicle that was traveling southbound on Shelburne Road, according to police. Ali's car continued on Farrell Street before it jumped a curb, struck a tree and overturned in the Shaw's supermarket parking lot. Gure was ejected from the car and died at the scene, South Burlington police said in a press release.

"We have had a crash reconstruction team called in to assist with determining the mechanism of the crash," South Burlington police chief Trevor Whipple wrote in an email. "I suspect that there will not be an outcome to this investigation for some time."

Gure's husband, Said Elmi, is pleading with Vermont's congressional delegates to help bring his mother from a refugee camp in Uganda to care for his seven kids.

"We're in so much pain," Elmi, 34, said in Somali. The couple's children range in age from 1 to 12; his wife was still breastfeeding the youngest.

Elmi, who works at Peerless Clothing in St. Albans, said he doesn't have any close relatives in Vermont. Natives of Somalia, he and his family were resettled from a refugee camp in Kenya in early December 2016, about two months before President Donald Trump signed an executive order that closed the U.S. to refugees and nationals of seven predominantly Muslim countries, including Somalia.

Since the crash, Elmi said his younger children have been asking for their mother. If their grandmother were in the U.S., she'd be able to take care of the kids while he works, Elmi said. His wife's mother remains in a refugee camp in Kenya.

"Someone has to stay with the kids," said Abdirashid Hussein, a staffer at the Vermont Refugee Resettlement Program and owner of Brixton Halaal market in Burlington's Old North End, where a handful of men gathered on Monday afternoon to discuss Gure's funeral arrangements, scheduled for the next morning.

"He can't even explain what death is [to his kids]," Hussein added.

"If he's stuck in the house, I don't think he's going to be OK," said Noor Duale, who knew Gure. "I think we need to save him."

Two hours before the crash, and about two-tenths of a mile away, a fire broke out in the South Meadow Apartments in Burlington. The blaze damaged about eight units in the Champlain Housing Trust-owned complex, displacing 30 people. 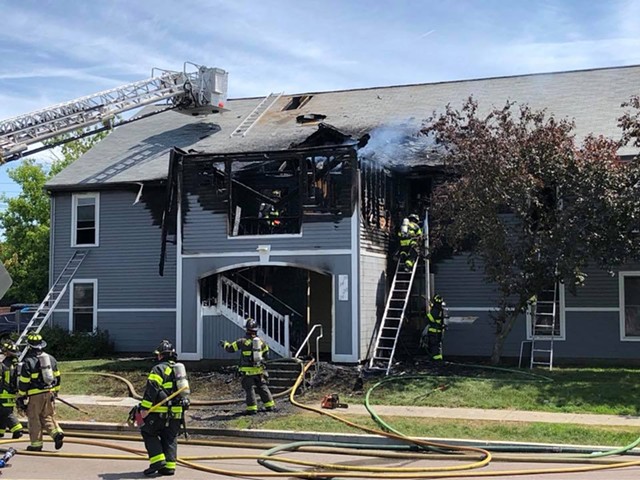 Among those displaced were Aden Haji's Somali Bantu family. The University of Vermont student said his mother, Asha Abdille, was injured when she and his 16-year-old brother jumped off of their three-bedroom apartment's balcony as the fire spread and they couldn't exit through the main door.

"She hurt her back," said Haji, "[but] she's recovering." He said his mother fractured a bone in her back and is on medication. He was on campus when the fire broke out, though his mother mistakenly thought that he was trapped in the apartment.

Haji, 23, said he's been told that the bedrooms and kitchen were severely damaged. The family has received assistance from several people, including some associated with the Janet S. Munt Family Room parent-child center and with AmeriCorps. Both Haji and his mother are AmeriCorps volunteers; he with the Vermont Folklife Center and she with the Family Room. Friends also started a donation page for the family.

Haji and his parents, two siblings and uncle were the first Somali Bantu refugees to resettle in Vermont, on July 23, 2003.

Both Gure and Ali had gone to the complex to check up on Haji's family, several community members said. Shared background had something to do with it: The Somali and Somali Bantu are ethnic groups from Somalia. According to Haji, his mother knew the Somali women involved in the car accident: "They knew each other from the Family Room," he said.

Champlain Housing Trust spokesman Chris Donnelly said Monday that the agency is still awaiting a report from the fire department. "We're not sure of the cause or even the extent of the damage," he said.

Most of the affected tenants are currently being put up at the TownePlace Suites in Williston, said Donnelly. "We're looking for openings right now in the rest of our portfolio to house people quickly," he said.

Despite the family's material loss, Haji said it was a "miracle" that his family survived the fire. "We have all of our family together," Haji said.
Prev
Next