Dozens Show Up to Wipe Out Chittenden County Cannabis Convictions

Patrick Jackson wants to be a pharmacy technician. Instead, the 28-year-old is working as a cook to pay his bills, a life choice he says he made, in part, because his two marijuana convictions — one in 2012 and one in 2013 — have been holding him back from finding a job he really likes.

Jackson took his chance to set his record straight on Tuesday, when Chittenden County State's Attorney Sarah George held an Expungement Day at the Edward J. Costello Courthouse on Cherry Street. Lawyers at the event walked attendees through the process of filing a petition to get misdemeanor marijuana possession convictions wiped off their records.

"I appreciated all the help they are giving me to get this off, so I can have a fully clean record, back to where I started when I was born," Jackson grinned as he spoke with Seven Days.

Nearly a dozen people were there when the legal aid clinic opened at 9 a.m., and about a dozen more trickled in over the next two hours.

Clients first completed identification forms in a reception area, then entered a classroom where lawyers and legal assistants sat around tables behind laptops, coffee cups by their sides, waiting to help attendees complete their paperwork. George signed off on the forms and passed them to Vermont Legal Aid attorneys, who filed the petitions with the court.

The whole process took less than half an hour for most clients. The Pennywise Foundation, a Richmond-based nonprofit, covered the $90 filing fee for each petitioner.

One of the first arrivals was Glyn Wilkinson, a semiretired, self-employed carpenter. The seventysomething, who ran for Vermont Senate as a Libertarian in 2014, said he'd been unable to buy a gun because of his criminal record: pot convictions in 1968 and 1974. Wilkinson considered such restrictions a violation of his Second Amendment rights.

He also recalled being stopped at the Canadian border and questioned about the charges on his record and said he hopes to move to the Caribbean, something having a clean record would make easier. Wilkinson said it was high time society recognized that possessing cannabis, which was created by God, does not make a person a danger to society.

“I’ve been carrying this on my shoulders for half a century. It’s a long time for this day to come, you know, get some justice on this thing,” Wilkinson said before he entered the clinic.

He then left happy. “I’m really appreciative of the state’s attorney and her people who are doing this," he said. "It almost brings me to tears."

George oversaw the clinic, instructing staff and volunteers and giving advice to attendees. Support also came from the Center for Justice Reform at Vermont Law School and David Cahill, the state's attorney in Windsor County, which hosted its own Expungement Day last Saturday.

“This is incredible. I’m a defense lawyer, everyone else here is a prosecutor. Watching prosecutors work to expunge peoples' records makes my heart warm,” laughed attorney Tim Fair, who specializes in cannabis law and came by the clinic in the morning to see if extra help was needed.

The event ran into some issues. For instance, the petition form created by the state's attorney’s office had to be altered for different situations, such as dismissed charges.

None of that could bring down the feel-good vibe of the event.

As he filled out a petition, one man called out to George, “Thank you, my dear, for doing all this," while another threw her a grin and a thumbs-up upon discovering he never had a conviction — or a warrant out for him — in the first place. George told Seven Days that expungement has been one of her three main priorities since she was appointed state’s attorney in January 2017. Moving forward, she hopes to see legislation for automatic expungements and would like to extend expungement support to crimes outside of marijuana. Most non-violent convictions are eligible for expungement after certain requirements are met, George explained.

Robert Sand, director of the VLS Center for Justice Reform, said it is unusual that George and Cahill have agreed to expunge misdemeanor marijuana offenses for people who may also have other offenses on their records.

“It’s consistent with law, but an interpretation not everyone would agree with,” he remarked.

When asked about her willingness to expunge those with a messy history, George said there is a moral argument to give people the opportunity to remove convictions from their record for actions no longer considered criminal by the state, regardless of what they did before or after. But, she added, most attendees only had marijuana convictions, and their records were often from more than a decade ago.

One attendee with a more checkered past was Steven Martin, 33, a local hip-hop performer who was first arrested when he was 16 for smoking weed in City Hall Park. Martin faced federal charges for selling a firearm in 2007 and said he was given a longer sentence because of his misdemeanor marijuana conviction. Now, with a clear record, Martin hopes to start an entertainment business. 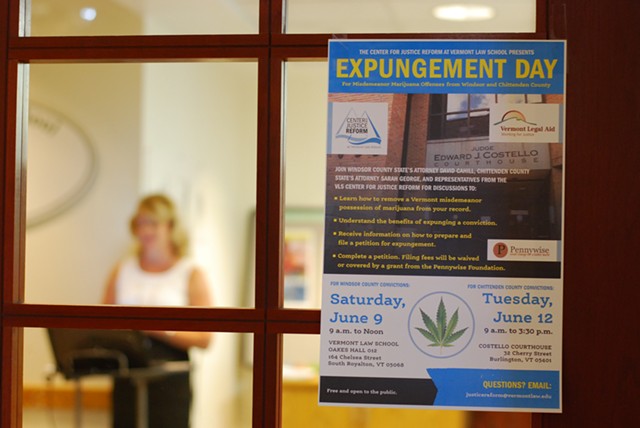