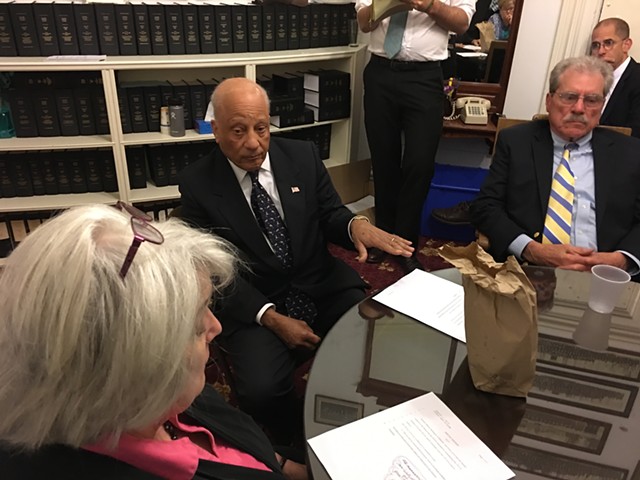 The state Senate on Thursday made quick work of passing H.13, a budget bill that encompasses the vast majority of the budget approved by the legislature in May, but excludes areas of disagreement with Gov. Phil Scott. He is likely to receive the bill on Saturday, which would give him until next Friday to sign or veto it. The governor has already promised a veto.

The bill would set homestead property tax rates at this year's level and allow nonresidential rates to rise by 5.5 cents. The latter portion has attracted the governor's opposition; he continues to oppose any increase in property tax rates. Majority Democrats argue that the bill does not actually include a tax increase; it merely allows current law to set the nonresidential tax rate. And if signed by the governor, it would avoid a potential government shutdown on July 1, the beginning of the new fiscal year.

The process took only a single day thanks to a suspension of Senate rules, which was approved on a 21-4 vote. Senators Carolyn Branagan (R-Franklin), Randy Brock (R-Franklin), Brian Collamore (R-Rutland) and Dave Soucy (R-Rutland) were the dissenters, while two members of the Republican caucus were absent and one — Sen. Richard Westman (R-Lamoille) — voted with the Democratic majority.

When the full Senate took up H.13, Brock rose to offer an amendment that would have set nonresidential rates at current levels. "We're voting on H.13 to keep the government operating," he argued. And since a veto is all but certain, Brock said, H.13 would not accomplish its stated purpose.

There followed a brief recess to allow the Senate Finance Committee to consider the amendment. Brock, who is a member of the committee, pressed his case but got no support from the five Democrats who were present.

Sen. Michael Sirotkin (D-Chittenden) countered that the Brock amendment would essentially give Scott everything he wants. "Why would the governor negotiate if he gets level tax rates?" he said.

"This would give the governor the upper hand," added Sen. Brian Campion (D-Bennington).

The panel voted 5-1 against the amendment, with Brock as the sole dissenter. On the Senate floor, his amendment was defeated 20-5, with Westman switching sides from the rules suspension vote.

After that, there was no further floor debate. The bill was approved 22-3, with Republicans Branagan and Westman joining the Democratic caucus.

Before the Senate took up H.13, it unanimously approved a resolution affirming its support for the Joint Fiscal Office, the nonpartisan body that provides financial and economic expertise to the legislature. The JFO's impartiality has recently been called into question by Scott's chief of staff Jason Gibbs. The measure accused "an individual in the Executive Branch" of attempting
"to undermine public confidence in nonpartisan staff in the manner seen in Washington, D.C."

All five Republicans present voted in favor of the resolution.
Prev
Next