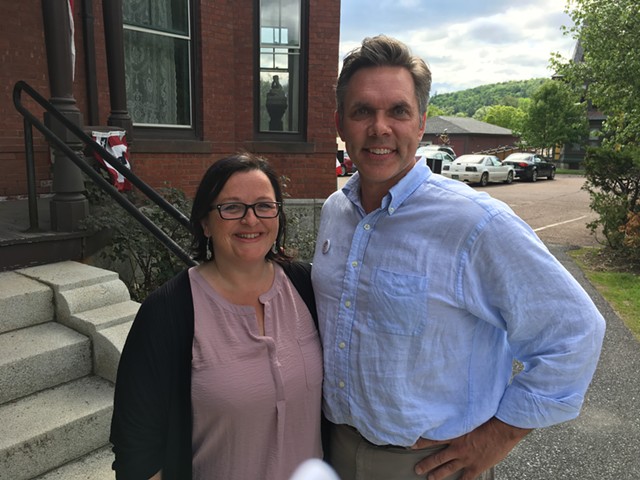 The filing deadline for candidates in Vermont's August primary was 5 p.m. Thursday. There were no huge last-minute surprises; the rumor mill proved thoroughly unreliable.

The latest subject of speculation to formally pull out: former Barre mayor Thom Lauzon, who'd been pondering a Republican candidacy for lieutenant governor. The deciding factor, he said, was his wife, Karen. "She said, 'Do you really have a passion for the job?' I said, 'No, because I don't really know what the job is!'"

Republicans did get a late challenger to Sen. Bernie Sanders (I-Vt.): Manchester real estate agent Lawrence Zupan, who's virtually unknown in Vermont political circles. Zupan joins Burlington attorney Jasdeep Pannu and perpetual candidate H. Brooke Paige of Washington on the Republican primary ballot, contending for the chance to challenge Sanders, the most popular politician in the state. He happens to have more than $6 million in his reelection war chest. (A necessary caveat: Petitions must be checked by the Secretary of State's office, so the candidates listed in this column are not yet official.)

In the August primary, Sanders will face long-odds Democratic challengers Rocky de la Fuente, a Californian best known as a fringe candidate for president; and Folasade Adeluola, a resident of Indiana whose petitions list a Shelburne motel as her official residence.

U.S. Rep. Peter Welch (D-Vt.) has attracted two Democratic primary challengers: Dan Freilich, a physician at the VA Medical Center in White River Junction, and Bellows Falls resident Benjamin Mitchell, who heads an academy for at-risk high school students in Keene, N.H. Two candidates have filed on the Republican side: Paige and Anya Tynio, a resident of West Charleston who's a sales rep for the Newport Daily Express.

House minority leader Don Turner (R-Milton) will face incumbent Progressive/Democrat Lt. Gov. David Zuckerman, but otherwise the statewide Republican primary ballot will be a one-man show. Paige, best known for his top hat and formal dress, has filed for all five of those offices, in addition to Senate and U.S. House. He somehow restrained himself from filing for governor.

His filings may seem little more than a curiosity, but he could prove to be an obstacle for the VTGOP. If an office attracts no candidates from a given party, that party can select a candidate to fill the slot. Paige's presence would prevent the Republicans from choosing a candidate for, say, auditor or treasurer — unless he withdraws.

Why the blizzard of filings? "I want to point out how bad our primary process is," Paige said. "I think we should have closed party primaries or, in a small state like Vermont, caucuses would be ideal."

Paige said he doesn't plan to stand in the way of legitimate Republican candidates who may emerge down the road. He is open to withdrawing after the primary from any race in which a worthy Republican steps forward.

More petitions for the state legislature could filter in for the next few days. Those candidates had to file by 5 p.m. Thursday with town or county clerks, but it may take a little time for the petitions to reach the Secretary of State's Office. But as of Thursday, it was looking like slim pickings for the VTGOP — especially in the House, where the party will be trying to keep enough seats to sustain gubernatorial vetoes. That's 51; the Republicans currently have 53 seats in the House.

As of midafternoon, a mere 59 Republicans had filed petitions. The Democrats had fielded a healthy 107. Republicans will still be able to choose candidates to fill empty slots on the ballot. But so far, a heavy recruitment effort by the state party has yielded a thin harvest.

The Secretary of State's Office will issue a final list of August primary candidates within a few days.
Prev
Next