Turner Collecting Signatures to Run for Lieutenant Governor | Off Message 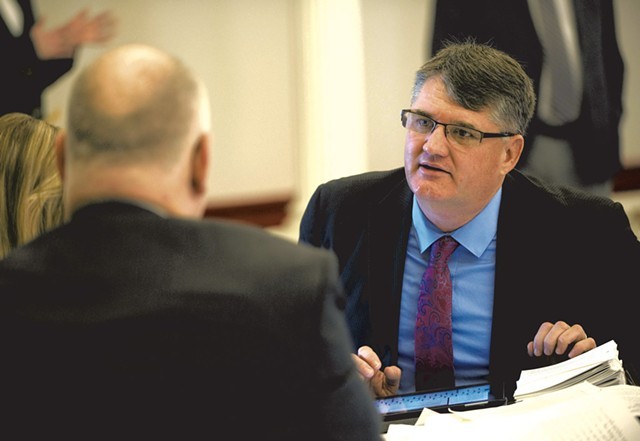 Rep. Don Turner (R-Milton), the minority leader of the Vermont House, is circulating petitions to run for lieutenant governor, according to several friends and associates.

If he gathers and submits 500 signatures by Thursday's filing deadline, the Milton Republican would face off against first-term Lt. Gov. David Zuckerman, a Progressive and Democrat from Hinesburg.

Turner has not formally announced a run and could still back out. He declined an interview request, writing in a text message, "I prefer not to comment until which time I make my final decision."

Ron Hubert, Turner's former district-mate in the House, has been collecting signatures for his friend at Milton's Middle Road Market, which Hubert owns. He said Tuesday that he had gathered 50 signatures.

Milton Selectboard member Brenda Steady, Turner's cousin, said she has also been on the hunt for signatures. "I've got a page here," she said. "I haven't got them all filled out yet."

The 53-year-old realtor has served in the House for more than a dozen years and has led the Republican caucus since 2011. Turner stepped down last year as Milton's fire and rescue chief, but he picked up yet another job: Milton town manager. At the time, he said he would have to reevaluate after the 2018 legislative session whether he could juggle both his legislative and municipal roles.

But according to Steady and fellow selectboard member John Palasik, town leaders are confident the part-time lieutenant gubernatorial position would not interfere with Turner's role as town manager.

"We have not had any issues in this last year. In fact, he's been doing a very good job with us," Palasik said. "We're guessing it'd probably be the same time [commitment]."

Said Steady, who used to work as Turner's personal assistant, "I think he can handle it. He's a person who can take care of the people."

The Vermont Republican Party has struggled this year to recruit candidates for higher office. No well-known, well-funded Republicans have stepped up to oppose Sen. Bernie Sanders (I-Vt.), Congressman Peter Welch (D-Vt.) or the five other statewide Democratic and Progressive officeholders up for reelection this fall.

“I was beginning to be surprised that there wasn’t going to be a challenge, given that it’s the second-highest office in the state,” Zuckerman said of his position. “I think it’s good for different ideas to be debated, so I welcome the discussion.”

An organic farmer who spent 18 years in the legislature, Zuckerman defeated Republican Randy Brock in the 2016 election by a vote of 52 to 46 percent. He said he gets along well with Turner and hopes to run a positive race.

“I think it’ll be an interesting discussion about style, leadership and policy,” Zuckerman said. “And I feel pretty confident Vermonters are happy with what I’ve done and hopefully will send me back again.”
Prev
Next