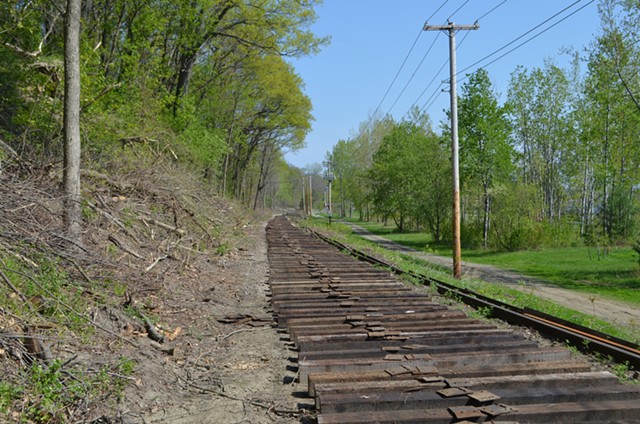 Vermont Railway is building 1,200 feet of new track alongside a section of the Burlington Bike Path.

Construction began about a month ago, according to Selden Houghton, the railway’s vice president, and will be completed in about another month. Crews cleared trees and brush to make way for the track, which extends from the waterfront dog park through an area known as the Urban Reserve, almost reaching Texaco Beach.

Houghton said he’s unsure how the railway will use the new track. Rails were once there as part of the line to the Champlain Islands, but were removed in the 1980s, he said.

“It gives us some more working room,” Houghton said. “There’s no formal plan — just want to get the track back.” He said he does not know if the railway will store train cars there. About two dozen empty tanker cars were parked Thursday along the section of track that runs behind the city skatepark, just south of the area where crews are installing new track.

Houghton said the railway needs no permits or approval because it holds a right-of-way to the property and has “since day one.” He did say he’d been in touch with Chapin Spencer, the city’s Public Works Department director, about the project.
Prev
Next