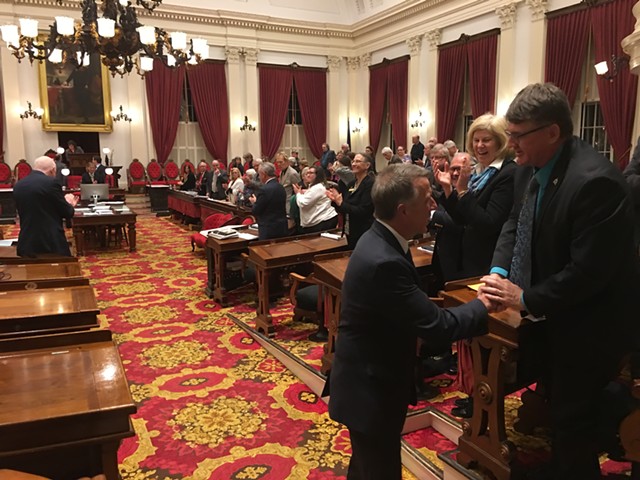 The hours (and hours) before the Vermont legislature wrapped up its 2018 session were mostly an exercise in procedural tedium. There was little, if any, drama to be had.

The only question was whether the House Republican caucus would agree to suspend the rules to allow immediate votes on a series of bills. If its members didn't, lawmakers would have been forced to come back the following week for at least one additional day. Eventually, after a late-afternoon meeting, the GOP agreed.

But amidst the tripartisan unity over getting the heck out of the Statehouse, Republicans did throw up one procedural maneuver that appeared designed to produce a nice little talking point for Republican Gov. Phil Scott.

During consideration of H.928, a bill that sets limits on salary hikes for gubernatorial appointees, House Minority Leader Don Turner (R-Milton) offered an amendment that would have removed the pressure to reach agreement on the big tax and budget bills — in the event that Scott vetoed them. He proposed allowing the state to continue operating indefinitely after the start of the new fiscal year, on July 1, with spending set at this year's levels. Otherwise, state law would force a government shutdown in the absence of a budget.

After Turner introduced his amendment, House Speaker Mitzi Johnson (D-South Hero) declared a brief recess so the House Government Operations and Appropriations committees could consider it. They did so, openly, on the House floor. VTDigger.org reporter Colin Meyn tried to listen in, but he was ushered away by House Clerk Bill MaGill. Which seemed a clear violation of open meetings laws, since the two committees were conducting official business.

Gov Ops and Approps ultimately voted against the Turner amendment, after state Treasurer Beth Pearce produced a memo warning that such a continuing resolution could harm the state's credit rating. Appropriations chair Kitty Toll (D-Danville) read the memo on the House floor and added, "I feel strongly about the importance of preserving our government process. We cannot jeopardize the financial health of our state for political purposes."

Turner's proposal then proceeded to a vote, and was defeated 89-45.

Even before the roll call finished, members of Team Scott sprang into action on Twitter:

Too bad the majority is willing to take the state budget hostage to raise $83 million in taxes.

That "$83 million" was a gubernatorial talking point from earlier in the week; by Saturday night it was a vast overstatement because the House and Senate had trimmed or eliminated proposed tax increases.

The rapid response — and the inevitability of Turner's defeat — made clear that his amendment was designed for no other purpose than to produce a political talking point: The legislative majority is so anxious to raise taxes that it's willing to shut down government if it can't get its way.

Which, honestly, turns reality upside down.

Unlike the federal government, Vermont has always operated within its means. It has always had a working budget, as state law requires. Traditionally, that's been a point of pride for all political parties.

Turner proposed a break with fiscal prudence in order to insulate the governor from the political fallout of a government shutdown prompted by his own veto.

Well, they wanted a talking point and they got one. Maybe next time they can devote that energy to trying to work with the Democrats.
Prev
Next