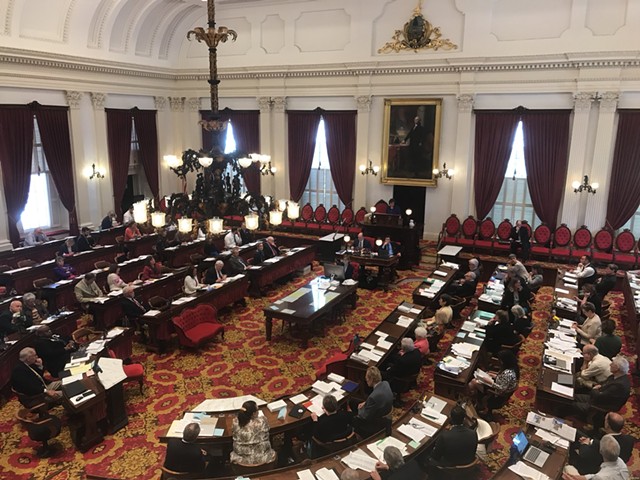 The Vermont legislature approved a pair of bills Friday that would raise the state's minimum wage to $15 per hour by 2024 and create a paid family leave policy for workers.

The Senate gave final approval to the minimum wage bill, which includes a provision that would allow employers to pay students $3 less than the state-mandated $15 per hour.
The House, meanwhile, voted 90 to 53 to give final approval to H.196, the paid family leave bill. It would increase taxes for employees, who would pay into a state fund that would compensate workers 80 percent of their normal salary during qualifying leave.

Gov. Phil Scott has criticized both bills and will soon face a decision about whether to veto them or let them become law.

"We are just happy at this point that both of them are on the way to the governor's desk," said Elise Greaves, the political engagement coordinator for the advocacy group Rights & Democracy. "Of course, we have more work to do in that department, but in both cases we feel like these are a huge step forward for economic justice and workers' rights in the state."

Greaves said Rights & Democracy is working to convince Scott to sign the bills. Scott has said he will veto any legislation with a new tax or fee, and has said increasing the minimum wage is the wrong way to make Vermont more affordable.

"If he vetoes both, it's time to have the conversation about whether or not our governor stands with working Vermonters, and we'll begin organizing around that," she said. "There is support for this overwhelmingly in our communities, and now is the moment to listen to the people and sign both of these bills into law."

Correction, May 14, 2018: A previous version of this story misstated the revenue source for the state's paid family leave fund.
Prev
Next