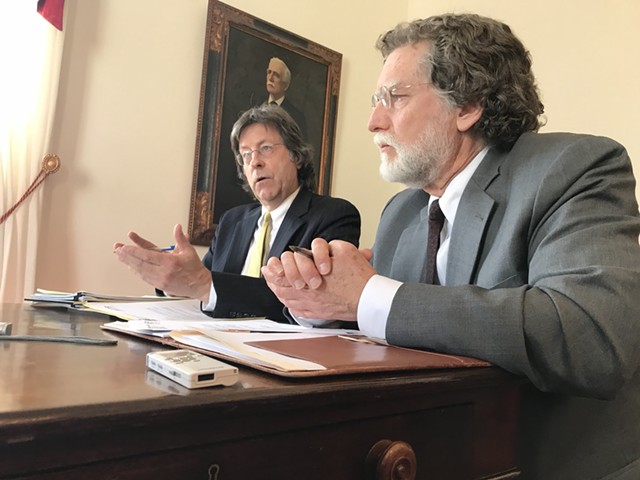 A better-than-expected April for state revenues means that Vermont lawmakers have $44.2 million more to use in the budget for fiscal year 2019, according to a report by two state economists.

Vermont's Emergency Board, which is made up of Gov. Phil Scott and budget-writing state legislators from both chambers, voted unanimously on Monday to accept the report, which increases the annual revenue forecast.

Now, the legislature must decide whether to follow Scott’s demand that they use the money to prevent a property tax increase, or budget it elsewhere.

Despite the rosy numbers, legislative economist Tom Kavet and administration economist Jeffrey Carr told the board not to count on state revenues staying high, attributing the upswing to “unique events” that are “unlikely to persist.”

“Many of these are related to recent federal tax law changes,” the economists said in a memo to the board.
Company buyouts that led to major windfalls for shareholders also helped Vermont's revenues beat expectations for April, the economists said.

Before the board met Monday, Scott issued a press release calling on lawmakers to use the money to pay for his plan to keep property tax rates flat. About $58 million is needed for the governor's proposal, and some would likely come from budget cuts. “What I cannot support is using this one-time surplus without addressing our recurring structural problems or failing to return the surplus to taxpayers through tax relief,” Scott said in the release.

After the Emergency Board meeting, House Ways and Means Committee Chair Janet Ancel (D-Calais) said that she would rather save some of the money in the event of a recession. The economists warned that the economy has been recovering from the 2008 recession for a historically long time, and a downturn is likely in the coming years.

“The best way to use it is to put it into things that will have a long-term benefit such as putting it in reserves in preparation for the next recession, paying down the … teacher’s health care obligation that we have. Those kinds of things, which over the long term will really help Vermonters,” Ancel said.

The legislature is expected to adjourn this week, but Scott’s last-minute introduction of an education plan could lead to a standoff with lawmakers over how to manage school costs.