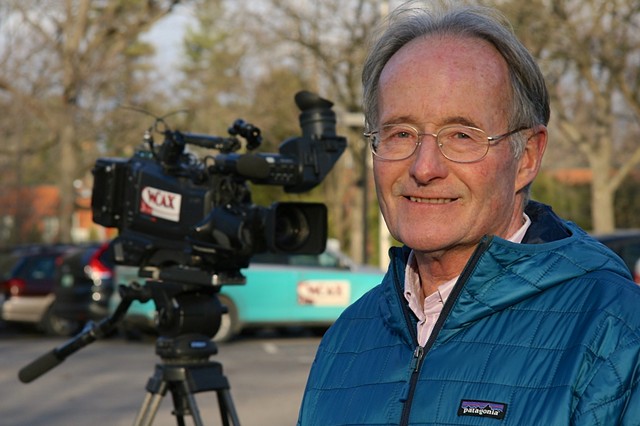 On-air talent was spared and the station has no plans for further job cuts, said Jay Barton, vice president and general manager.

The reductions are part of an effort to make the operation more efficient by training reporters to do some of their own camera work, either on station equipment or cellphones.

“It’s a very different world than it was 10 years ago," Barton said. "This is about adaptation.”

Veteran cameraman Bob Davis was among those who lost his job. The senior photographer found out at 11 a.m. Friday that his 36 years at the South Burlington station were coming to end.

"It’s a little tough," Davis told Seven Days. "The reality is that the broadcast business is changing."

A shift toward multimedia journalists led to Davis and other WCAX photographers teaching reporters to do camera work. The irony was not lost on him. “We've been training our replacements,” Davis said.

The Martin family founded WCAX in 1954, and sold the operation to Atlanta-based Gray Television for $29 million last year. "There were changes obviously to be had once the Martins sold the business,” Davis said.

The staff behind the cameras often lasted longest at the station, and they helped new reporters find their way around the community, said Davis.

He fears the new model won't "support storytelling in a tradition that the Vermont viewer has come to appreciate and expect from its local media.”

Davis met presidents, governors and dairy farmers over the three decades he shot big and not-so-big stories. It's the latter type that will stay with him.

Barton declined to comment on the severance packages that employees received. In addition to the photographers, a business employee was let go, as well as a satellite truck staffer, he said. That leaves the station with about 90 employees.

The departure of several reporters and anchors over the last eight months was not related to the new ownership, Barton said. Recent departures include Keith McGilvery, Kristin Kelly, Jennifer Costa and Eva McKend.

New opportunities and family concerns drove their decisions to leave, according to Barton, who said he talked to all of the reporters about why they moved on.

"I've tried to have eye-to-eye, tell-me-the-plain-truth conversations with everyone," Barton said.

Friday's layoffs are something "that we do not plan to repeat," he emphasized. "This is a transitional moment, if you will."