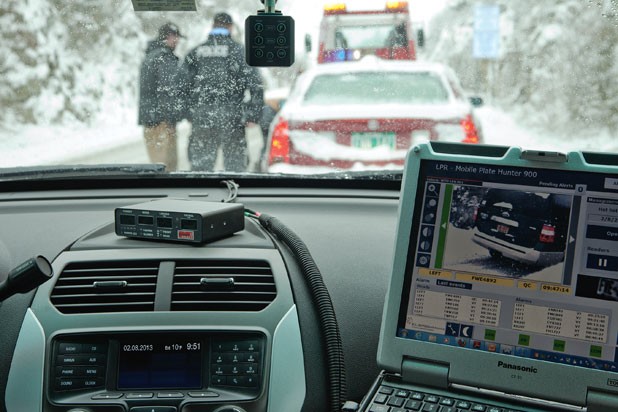 The Vermont State Police and 17 other law enforcement agencies in the Green Mountain State have stopped using automated license plate readers, resulting in a steep decline in the amount of data collected about vehicles on Vermont’s roads.

State Police Capt. Kevin Lane told the House Judiciary Committee Friday that the agency stopped using the technology because of state rules put into place in 2016 and the potential cost of replacing the devices as they reach the end of their useful lifespan.

“Looking at replacements was expensive, and some of the reporting requirements when the law changed were very challenging to meet,” Lane said.

According to a report that Lane sent the legislature in January, there were 69 working license plate readers mounted to police vehicles across Vermont at the beginning of 2017. By the end of the year, there were just 41.

The report said the agencies that stopped using plate readers in 2017 include police departments in Bennington, Brattleboro, Newport and South Burlington, as well as sheriff's departments in Grand Isle, Orange and Orleans counties.

License plate readers mounted on police cars take photos of vehicles on the road, then use software to scan the plates for vehicles police are seeking, including stolen cars and vehicles associated with wanted or missing people. Under Vermont law, the time and location of the photographs can be recorded and saved in a statewide database for up to 18 months — even if the vehicle isn’t on a stolen-car "hotlist" and the driver is not suspected of a crime.

A 2016 law added new reporting requirements as the legislature sought more solid data about how license plate readers are used and how well they're working.

Reps. Barbara Rachelson (D-Burlington) and Thomas Burditt (R-West Rutland) are considering shortening the data-retention time. Rachelson said Vermont’s 18-month period is the second-longest in the country. Most other states with time limits set them at a couple of weeks to a few months. New Hampshire law is most restrictive, allowing police to store data for just a few minutes — long enough to check plates against a hotlist, but not to create a database.

Lane said shortening the data retention would give investigators less to work with, but said it’s difficult to quantify the effect it would have on law enforcement, because police would never know if older data may have helped a case.

Rachelson has doubts about how useful the technology is, especially now that agencies are taking the devices off the road at an unprecedented rate.

“[I]f it were such an incredible, effective tool, people would be saying ‘We need the money for this. This is really important,’” Rachelson said during the House Judiciary Committee’s Friday meeting.

Many of the plate readers in Vermont were purchased with federal grants from the Department of Homeland Security. A Vermont Public Radio analysis in 2014 showed the data collected by license plate readers is rarely useful in solving crimes or otherwise enhancing public safety.

Privacy advocates say the massive data set generated by license plate readers is cause for concern because it is a record of the movements of innocent Vermonters. The state’s database contained more than 5 million data points as of January 1.

That database is notably smaller than in past years. At the end of 2015 there were 8.7 million data points in the system. But the reduction in license plate readers on the road means less data is fed into the system, further reducing the odds that investigators will find valuable evidence there.

State law puts strict limits on who can access the data and requires police to have a “legitimate law enforcement” inquiry before checking the system. While there are no known cases of abuse, the American Civil Liberties Union of Vermont argues that the act of collecting the data is by itself problematic.

“I think the worry is that it says ‘legitimate law enforcement purpose,’ but … it’s still keeping a record of people’s movements,” ACLU-VT policy director Chloé White said before the House panel. “They are presumed innocent … and yet we are tracking and recording their activities and using it for later on just in case. And that’s worrisome. There’s potential for abuse as well.”

The law authorizing law enforcement to use license plate readers expires July 1. The House Judiciary Committee is considering a bill that would extend it for two years. Rachelson and Burditt both voiced a desire to implement new safeguards against abuse of the data.

The two haven't proposed specific changes to state law. With only weeks remaining in the 2018 legislative session, it’s unclear if lawmakers will simply extend the law with plans for future reforms or attempt to put new legal limits on the technology this year.