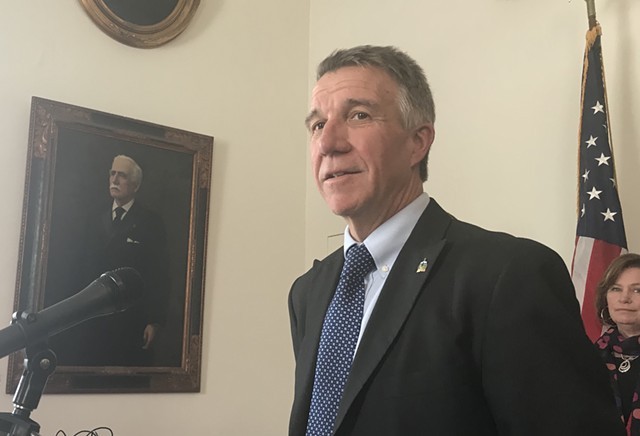 Gov. Phil Scott has proposed using one-time money from elsewhere in the state budget to prevent a projected 5.5 cent increase in the statewide property tax rate.

Speaking at his weekly press conference on Thursday, Scott called the use of one-time money “an investment” in measures to cut school spending in future years.

“We may not be able to book immediate savings because I’m not asking the schools to go back and do anything with their budgets,” he said. “But if we could find an opportunity for savings over the next few years, we’d look at it as an investment utilizing one-time money this year.”

Scott is looking to fill a $40 million shortfall in the education fund, caused in large part by a 2017 deal with the legislature that involved spending reserves and one-time funds to reduce property taxes. He noted that that deal “wasn’t my initiative, as you may recall.” And he said he’s willing to use one-time money only if there are significant moves to cut costs measurably in the next few years.

He refused to identify specific cost-cutting initiatives, instead referring to a lengthy list of ideas delivered to the legislature earlier this year. Those include negotiating teacher health care benefits on a statewide basis, reducing staff-to-student ratios in schools and allowing attrition to reduce staffing over time.

Principled Stand? Why Vermont's Former Ed Chief Split With Scott
By Alicia Freese
Education
He pooh-poohed the challenge of finding $40 million to fill the education fund gap. “There’s all kinds of opportunities in a $1.6 billion budget.”

When asked for examples, he said ,“It’s very fluid, obviously. I’m confident we can find the money. It won’t be easy, but we can find it.”

Scott’s statement took legislative leaders by surprise. None had been notified of the idea in advance, and this reporter found himself breaking the news to several top lawmakers.

Rep. Janet Ancel (D-Calais), chair of the tax-writing House Ways and Means Committee, wondered where the governor would find $40 million in one-time money and expressed deep doubt about the idea.

“I would be concerned that this would put us in a deeper hole in 2020,” she said. “I haven’t seen the proposal, and it’s hard to react to something when I don’t really know what it is. But one-time money, used entirely for the purpose of keeping tax rates flat … I would really need some convincing.”

Rep. Dave Sharpe’s (D-Bristol) House Education Committee was scheduled to hear testimony on school spending from Finance Commissioner Adam Greshin later Thursday afternoon, but Greshin canceled his appearance. Sharpe believes the governor is searching for a way out of a difficult spot.

“He painted himself into a corner,” Sharpe noted. School budgets “came in remarkably low, and the voters supported them … He’s not left with many options.”

At this point, lawmakers are waiting for more specifics from the administration — on how to cut school spending and on where the governor wants this $40 million to come from.

This significant and unexpected shift in the administration’s position echoes last year’s “April surprise” unveiling of Scott’s demand for statewide teacher health care negotiations. His insistence on that idea, which he claimed would save as much as $26 million, resulted in an extended legislative session and a two-day veto override session in mid-June.

To judge from top lawmakers’ immediate reaction, Scott will have to offer a realistic and specific plan if he wants to gain significant support. The Democratic legislature is losing patience with what they see as the Republican governor’s inconstancy and lack of specificity on education spending.