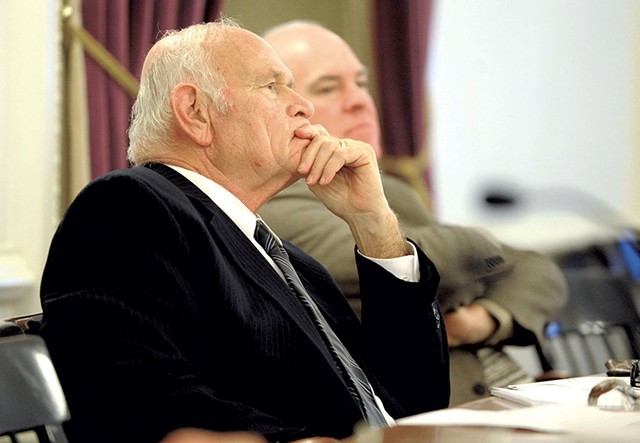 Vermont lawmakers are considering lowering the bar for what constitutes an attempted crime in response to the alleged Fair Haven school shooting plot. But they're also wary about overreacting, and the American Civil Liberties Union of Vermont has flagged what it considers “significant constitutional problems" with the current proposal.

The Vermont Supreme Court ruled last Wednesday that there was insufficient evidence to hold the accused teenager, Jack Sawyer, without bail. Sawyer purchased a shotgun, wrote in a journal and texted a friend about his plan to carry out a mass shooting at Fair Haven Union High School. But the justices concluded that those actions didn’t qualify as an attempt to commit murder.

Two days after the ruling, Gov. Phil Scott called on legislators to change state law. “I believe that anyone who takes so many specific steps to prepare to commit a horrific crime, and then confesses he is working to carry it out, needs to be held fully accountable,” he said in a press release.

The Fair Haven case prompted Scott and the legislature to pass an unprecedented package of gun legislation earlier this month.

On Tuesday, House and Senate committees began discussing substantial changes to a definition of "attempt" that’s prevailed for 112 years. Under current law, the perpetrator needs to make an "overt act" to be convicted of an attempted crime.

Under the legislature’s working draft, the perpetrator would only need to take a “substantial step,” which is defined as “conduct that is strongly corroborative of the firmness of the actor’s purpose to complete the commission of the offense.”

Members of the Senate Judiciary Committee described hypothetical murders and bank heists as they tried to parse what would constitute a substantial step. They also wrestled with a more fundamental question: At what point does preparing to commit a crime cross over into an attempt to carry it out?

The goal, Sen. Dick Sears (D-Bennington) said, is to change the law so the state doesn’t have to wait for a potential shooter to “walk into the school with a finger on the trigger in order to stop them.”

Chloé White of the ACLU told the senate committee that the current proposal “raised significant constitutional problems and would be a setback in the progress Vermont has made towards improving its criminal justice system.”

“Our constitution,” she went on, “does not allow someone to be convicted of attempted murder for something written in a private diary, a blog post, a violent song, or in the course of other activity protected by the First Amendment.”

Sen. Joe Benning (R-Caledonia), who is a defense attorney, was one of several senators who voiced concerns about moving too quickly. “One thing I’m a little nervous about is we’re trying to legislate again in the midst of fear, paranoia and understandable concerns, but I don’t want to get this wrong,” he said.

Lawmakers will continue work on this issue throughout the week.