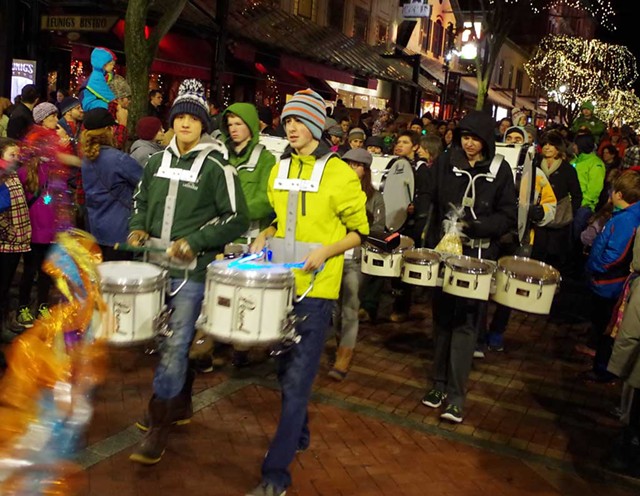 After 35 years, Burlington's annual New Year's Eve festival will not return next year. The First Night Burlington board of directors announced Tuesday that the event would be discontinued because of low attendance and the loss of a key sponsor.

The frigid temperatures during the most recent festival kept people at home, leading to a "substantial loss" for the organization, board chair Dave Mount explained in a press release. "Our reserves have been fully tapped," he wrote.

The board will pay off any outstanding debts from the 2018 event before disbanding First Night Burlington, Inc., at the end of April, according to the release.

First Night brought musicians, actors, parades and events to downtown Burlington since the inaugural event in 1983. The stroke of midnight was marked with a fireworks display. Mount said in an interview that he attended the first festival 35 years ago and brought his grandchildren in recent years to see Circus Smirkus perform. "Watching their faces light up with the magic of the circus — I'm going to miss it," he said.

Attendance had been dropping for some time, Mount added, but this year's cold temperatures, and a New Year's Eve that fell midweek, dealt the organization a heavy financial blow. In addition, NorthCountry Federal Credit Union, the event's principal sponsor for the past 10 years, announced that it would "substantially reduce" its participation in the future, "leaving First Night without a major source of sponsorship income," according to the release.

Mount raised the possibility of closure at a board meeting two weeks ago, he said. Board members at first were "incredulous," but in the end, they saw the writing on the wall. "I didn't see any alternative," he said. "None of us wanted to be on the board to shut it down."

Burlington City Arts will explore whether it can run an alternative to First Night, Mount said. Any remaining First Night assets will be donated to the organization.