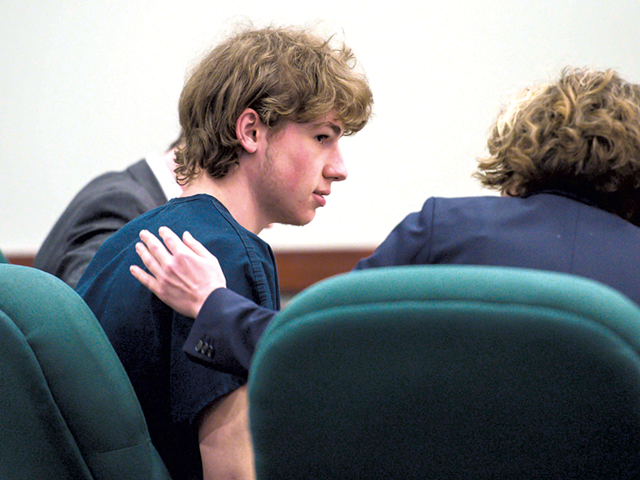 Gov. Phil Scott on Friday announced a series of steps to protect the Fair Haven Union High School community from a teenager who allegedly threatened a school massacre — but may soon be freed from prison.

The news came amid a flurry of developments in the case involving 18-year-old Jack Sawyer.

Earlier in the day, Sawyer’s attorney confirmed that her client had been served with an order, sought by Rutland County State’s Attorney Rosemary Kennedy, requiring him to not possess or buy any weapons after his release.

The "extreme risk protection order" was granted Thursday, one day after the Vermont Supreme Court ruled that there's not enough evidence to justify holding Jack Sawyer without bail. The ruling also indicates that the charges against him could be dismissed.

The governor said Friday that he’s “appalled” by Sawyer’s possible release, and announced several steps authorities would take ahead of that eventuality.

In all, Scott said, nine law enforcement agencies are prepared to spring into action to protect the school, the town, and a New York-based friend of Sawyer’s who learned of his plans and reported him to authorities.

The school district has obtained no-trespass orders against Sawyer, 18, and installed additional “security infrastructure,” Scott said. The Fair Haven Police Department has offered to increase patrols at the school and the governor said authorities have been in touch with Sawyer’s parents, who have cooperated.

Additionally, Scott said he was working with state, local and federal law enforcement to “identify any and all legal avenues to keep this individual in custody.”

He also called on legislators to close legal “loopholes” and pass a “domestic terrorism” law by the time Fair Haven students return from April break. Such laws almost certainly could not be retroactively applied to Sawyer, but would address similar cases in the future.

“The mere possibility that someone with a clear intent to murder innocent children could be back on the street shows there is an unacceptable loophole in our current criminal law,” Scott said. “I believe that anyone who takes so many specific steps to prepare to commit a horrific crime, and then confesses he is working to carry it out, needs to be held fully accountable.”

Earlier Friday, Sawyer's attorney, Kelly Green, said her client would not contest the firearms prohibition. It's the first such order issued in Vermont after Scott signed a package of gun control reforms on Wednesday, including one that allows authorities to seize firearms from people deemed an “extreme risk” to themselves or others.

Prosecutors charged Sawyer in February with three counts of attempted murder and one count of attempted aggravated assault with a weapon. Sawyer allegedly detailed plans for a school massacre in his journal and bought a 12-gauge shotgun in February.

Under the law, prosecutors can seek temporary orders to seize firearms for 15 days. A follow-up procedure could extend the period to six months.

In the last few days, the high-profile case, which helped inspire the gun control legislation, has moved quickly. Green said she filed a motion on Thursday to dismiss the charges against Sawyer, citing the Supreme Court decision.

"Each of [Sawyer's] actions was a preparatory act, and not an act undertaken in the attempt to commit a crime," the justices wrote. "Therefore, as a matter of law, defendant’s acts did not fall within the definition of an attempt."

On the same day, Kennedy filed a petition seeking the emergency protection order. She argued that Sawyer "poses an extreme risk of causing harm to himself or others with a dangerous weapon."

Family Court Judge Cortland Corsones granted the order on Thursday, according to Green.

Sawyer is currently incarcerated in Marble Valley Regional Correctional Center in Rutland, but his attorney was insistent that prosecutors abandon their case against her client.

"I think that’s what the Supreme Court has stated in its decision. Jack didn’t attempt any crime, he hasn’t attempted the charged crimes, and they have to be dismissed," Green said. "When there is not probable cause, the state's involvement in someone's life must end."