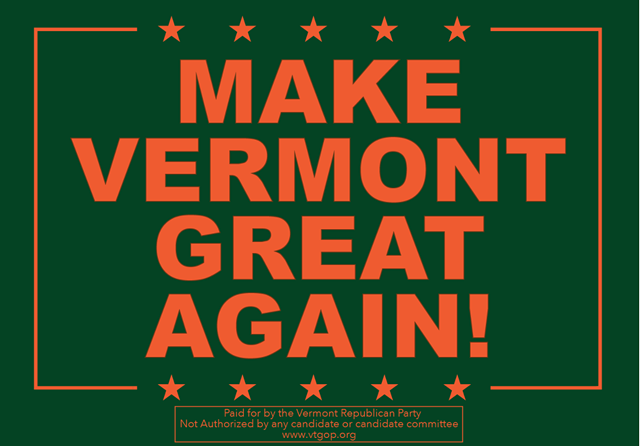 Some Republican Vermont lawmakers are distancing themselves from their own party's messaging.

The state GOP urged supporters in an email Wednesday to “MAKE VERMONT GREAT AGAIN!" — a riff on President Donald Trump’s campaign slogan. Sent several hours before Gov. Phil Scott, a Republican, signed a package of gun reform bills, the email evoked the language of gun rights supporters, many of whom are furious with Scott. The message also used a color scheme associated with the pro-gun contingent — hunter orange and green.

“In recent years,” the email read, “our state has been co-opted by the liberal elite. Out-of-touch politicians have been hell bent on stripping away every right and freedom that Vermonters hold dear.”

But, it continued, "Now is not the time to surrender ... 2018 is a critical year for conservatism in Vermont. If we are ever going to return Vermont back to its former glory, we need to band together to toss out every last liberal elitist politician in Montpelier."

House Minority Leader Don Turner (R-Milton) grimaced when a reporter showed him the email Wednesday afternoon. “I think they’re trying to seize this opportunity to raise money based on how frustrated a lot of our constituents are,” he said. But, “from my perspective, it just keeps dividing us when we need to reunite and finish the session.”

Turner said he’s been trying to bring his caucus back together in the aftermath of the gun debate, during which most GOP legislators parted ways with the Republican governor over measures that include universal background checks and limits on ammunition magazine capacity.

Asked specifically about the Trump reference, Turner said, “It wouldn’t have been the way I would have done it, for sure.”

Rep. Heidi Scheuermann, a moderate Republican from Stowe who voted for the gun bills, went further, suggesting that adopting Trump’s messaging would make it harder for GOP candidates running for office in Vermont.

“This embracing of President Trump and the methods and the sloganeering of President Trump doesn’t help us. He has the lowest-in-the-country approval rating in Vermont,” Scheuermann said. “I don’t know how many people in the party apparatus understand that challenge. As an elected Republican who faces this every day, I can tell you it is a challenge."

As for what could be interpreted as an implicit jab at Scott, the party's top officeholder? “He has shown us a way to win and we seem to be just kicking dirt in that path,” she said of the governor.

Vermont Democrats were more eager to discuss it. The party's executive director, Conor Casey, called the communication “absolutely repellant,” adding, “If there was ever any doubt that this is no longer the party of George Aiken or Jim Jeffords, this should clear things up.”

Read the full email below: