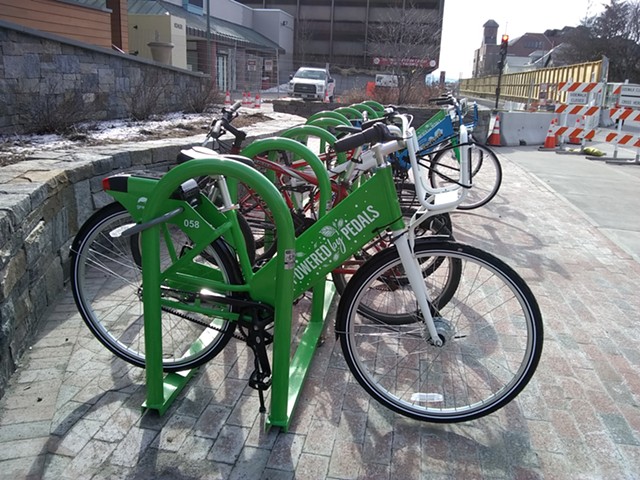 Approximately 85 people have signed up as members of Vermont's first public bike-share system, which launched last week in Burlington, Winooski and South Burlington.

Those members, who bought either month- or yearlong passes, have access to about 80 green and blue bikes spread out at 15 hubs in the three towns, according to Katie Martin, the program and marketing manager for the Chittenden Area Transportation Management Association, which helps oversee the bike program.

Riders racked up about 100 miles across 125 trips aboard the seven-speed bikes in the program's first five days, Martin said.

"People are taking quick point-to-point trips, getting where they need to go," she said. "It's working."

The Greenride bike-share program is a collaboration between the University of Vermont, Champlain College, the Chittenden County Regional Planning Commission and CATMA.

The partners have scheduled an official launch event and bike parade on April 18 in Burlington, the first stage of an initiative that will eventually include 300 bikes across seven Chittenden County towns. The program will add 25 electrical assist bicycles, known as e-bikes, to the fleet later this summer.

Riders can reserve a bike online or use an app. That'll give the user a four-digit PIN, which can be entered in the keypad on the back of the bike to unlock it from its spot on the rack. A half-hour ride costs $2. Monthly memberships cost $15, while a yearlong membership costs $50 and offers up to 60 minutes of ride time daily.

The bikes will be available for year-round use, which Martin joked "scares some people" unaccustomed to riding in the snow.

The first phase of the program costs about $200,000 annually. That total covers the cost of the bikes, which are leased from the Gotcha Group, a South Carolina company that was also hired to design and manage the program. It also pays for a contract with Burlington bike shop Old Spokes Home to do maintenance and evenly disperse the bikes around the different racks.

Racks can be found near the Winooski traffic circle; in Burlington's Old North End, downtown, on the waterfront and along Pine Street; on the UVM campus; and at Healthy Living, the Burlington International Airport and the University Mall in South Burlington. 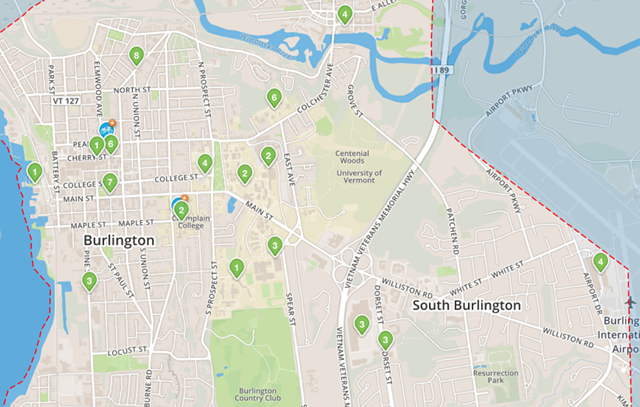 The bikes are GPS-enabled, which allows organizers to "see where people are traveling, and how often they’re traveling there," Martin said. The information will help the group plan for future bike infrastructure, she said, or determine where to set up bike hubs.

Within the coming year, the groups plan to start phase two by adding 200 more bikes, including 50 e-bikes. They'll be placed at about 50 hubs across Burlington, South Burlington, Winooski, Colchester, Williston, Shelburne and Essex.

The organizers have signed a three-year lease with the Gotcha Group, but when it expires, Martin said she expects the bike share to stick around. "We see bikes as an integral part of our transportation system," she said. "They're here to stay."

Ben & Jerry's and Seventh Generation are providing the majority of funding through sponsorships, Martin said. Corporate sponsors will cover 50 percent of the program costs. Institutions, such as Champlain College and the University of Vermont Medical Center, will fund about 20 percent, while cities and towns, including Burlington, will pay the remaining 30 percent. Mayor Miro Weinberger previously touted the initiative and has advocated for alternative transportation options in Burlington. He also pushed for controversial bike lanes along North Avenue and has touted upgrades made to the the Burlington Bike Path under his watch.

Last year, the city council adopted a Walk Bike master plan intended to improve transportation options for pedestrians and bicyclists around the city.