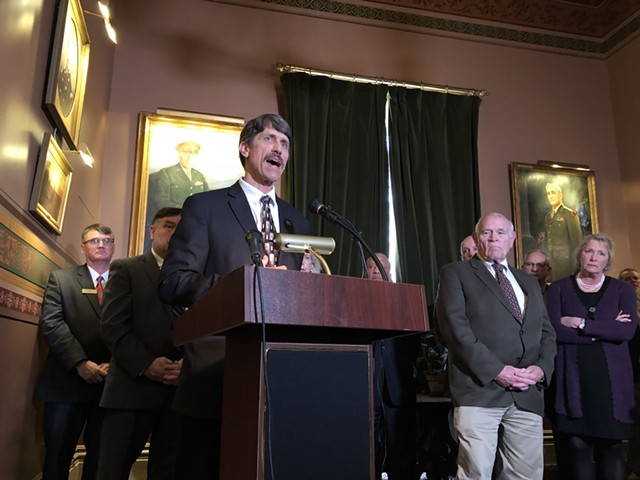 Sen. John Rodgers (D-Essex/Orleans), one of the most vocal opponents of gun control in the Vermont Statehouse, said Tuesday that he’s considering a run for governor.

“There’s a lot of support out there,” Rodgers said. “I’m definitely thinking about it.”

The right-leaning Democrat from Glover could capitalize on a wave of anger directed at Republican Gov. Phil Scott, who is poised to sign a package of gun control bills Wednesday. Previously a stalwart opponent of such measures, Scott reversed his stance in February after learning of an alleged school shooting plot in Fair Haven.

At a Statehouse press conference held with other lawmakers Tuesday, Rodgers reiterated his opposition to S.55, a bill that would mandate universal background checks, raise the purchasing age for guns from 18 to 21, limit high-capacity magazines and ban bump stocks.

Rodgers, 52, told Seven Days that he would likely run as a Democrat but hasn't ruled out running as a Republican or independent. He acknowledged that winning the Democratic primary could be difficult: “Rural Democrats love me. The more urban left-leaning Democrats don’t love me so much."

Three Democrats — Christine Hallquist, James Ehlers and Ethan Sonneborn — have already declared their candidacies for the November election. Keith Stern, another vocal gun proponent, has registered to run as a Republican.

Ultimately, Rodgers said, “I could be comfortable with any letter beside my name.”

WPTZ-TV first reported Rodgers’ potential run.
This isn’t the first time the senator has publicly floated the idea of a bid for higher office. He ultimately decided against a run for lieutenant governor in 2016.

Rodgers said concerns about his livelihood are the only thing holding him back. He runs a small construction company and plans to launch a hemp business with his son this summer. Balancing those obligations with a statewide campaign “seems like a pretty heavy lift,” he said.

Scott's office did not immediately respond to a request for comment.